The bill, which could still be enacted if state legislators override the governor’s veto, would make it illegal for transgender minors to receive gender-affirming medication or surgery.,

Gov. Asa Hutchison vetoed a bill banning gender-affirming surgery and medication for minors, saying he believed medical decisions should be left up to families and doctors.

I was told this week that the nation is looking at Arkansas, because I have on my desk another bill passed by the General Assembly that is a product of the cultural war in America. I don’t shy away from the battle when it is necessary and defensible. But the most recent action of the General Assembly, while well intended, is off course, and I must veto House Bill 1570. If House Bill 1570 becomes law, then we are creating new standards of legislative interference with physicians and parents as they deal with some of the most complex and sensitive matters involving young people. It is undisputed that the population of minors who struggle with gender incongruity or gender dysphoria is an extreme minority. But while they are a minority, they deserve the guiding hand of their parents and of the health care professionals that their family has chosen. House Bill 1570 would put the state as the definitive oracle of medical care, overriding parents, patients and health care experts. While in some instances the state must act to protect life, the state should not presume to jump into the middle of every medical, human and ethical issue. 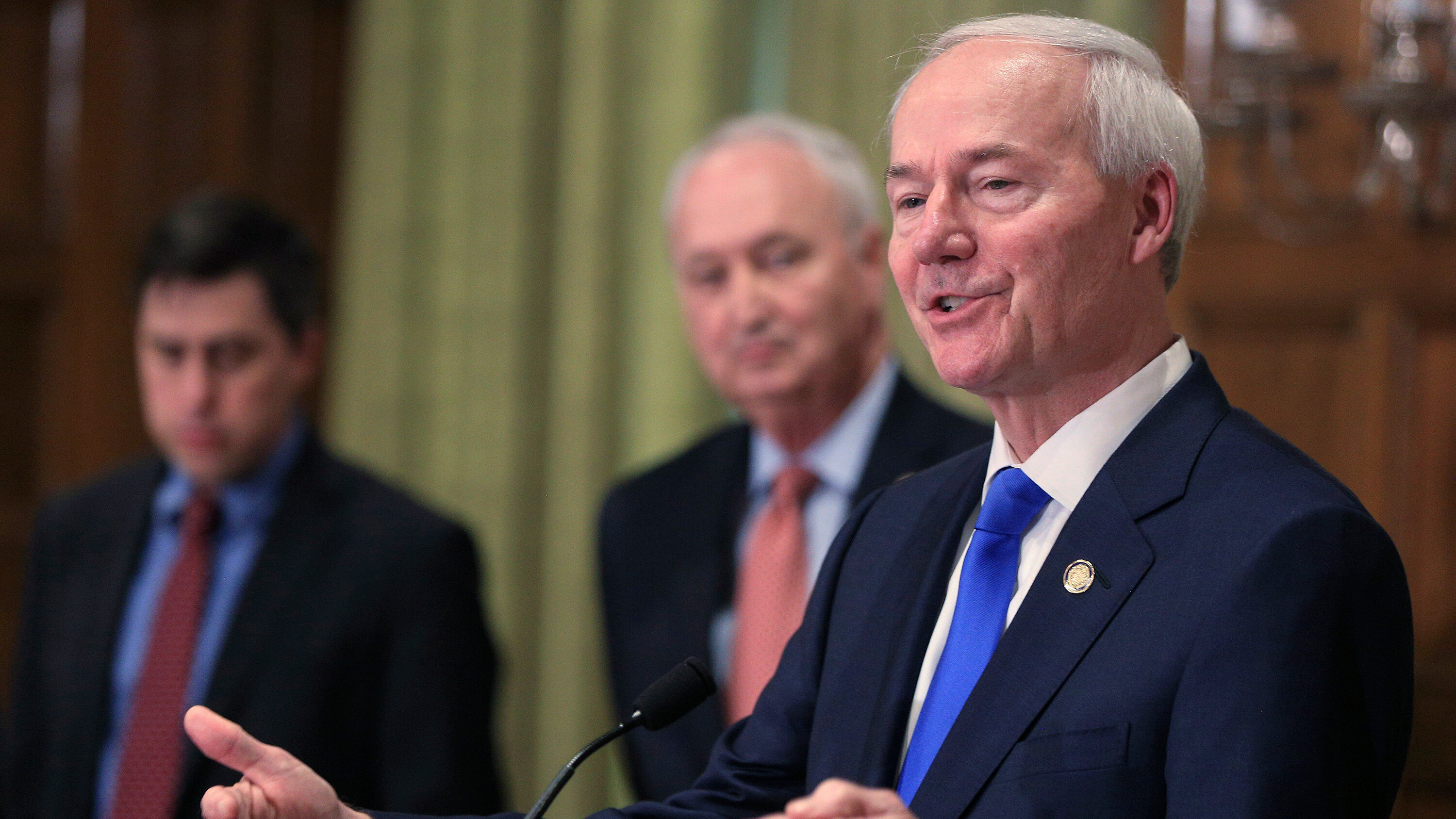 Gov. Asa Hutchison vetoed a bill banning gender-affirming surgery and medication for minors, saying he believed medical decisions should be left up to families and doctors.CreditCredit…Staton Breidenthal/The Arkansas Democrat-Gazette, via Associated Press

Gov. Asa Hutchinson of Arkansas vetoed a bill on Monday that would make it illegal for transgender minors to receive gender-affirming medication or surgery — a rare Republican rejection amid the growing conservative effort to restrict transgender people’s health care and participation in society.

The Arkansas State Legislature could override Mr. Hutchinson’s veto of the bill, known as H.B. 1570. Republicans hold large majorities in both chambers and passed the bill last month with mostly party-line votes: 70 to 22 in the House and 28 to 7 in the Senate.

“I was told this week that the nation is looking at Arkansas because I have on my desk another bill passed by the General Assembly that is a product of the cultural war in America,” Mr. Hutchinson said in announcing his veto. “I don’t shy away from the battle when it is necessary and defensible, but the most recent action of the General Assembly, while well intended, is off course.”

Chase Strangio, a lawyer at the American Civil Liberties Union who has fought anti-trans legislation in Arkansas and other states, said that while he and other advocates needed to be “tentative in our celebration” because of the possibility of an override, Mr. Hutchinson’s veto was significant both practically and symbolically.

“First and foremost, it’s such an important rebuke of this sweeping range of legislation targeting trans youth across the country,” Mr. Strangio said. Referring to two states that are considering similar bills, he added: “I hope Alabama’s watching. I hope Tennessee’s watching.”

Raquel Willis, a transgender activist and writer, called the veto “a great signal to the trans community and all of our supporters that the energy that we’re putting into this fight has a real impact.”

The lead sponsors of the bill — State Representative Robin Lundstrum and State Senator Alan Clark, both Republicans — did not respond to a request for comment.

Young transgender people and their supporters had mobilized in opposition to H.B. 1570, along with medical organizations like the Arkansas chapter of the American Academy of Pediatrics. Mr. Strangio and Ms. Willis said advocates intended to keep up the pressure as legislators consider overriding Mr. Hutchinson’s veto. If the measure is enacted, it could also be challenged in court.

In some other states, like South Dakota and North Carolina, pressure from businesses and the fear of economic fallout have led elected officials in recent years to hesitate or backtrack on measures that targeted L.G.B.T. people.

Supporters of the Arkansas bill say it would protect young people from undergoing irreversible medical treatments, and the text of H.B. 1570 claims — contrary to the consensus of medical professionals — that “the risks of gender transition procedures far outweigh any benefit at this stage of clinical study on these procedures.”

Medical research shows the opposite.

In a 2019 statement opposing laws that restrict minors’ access to gender-affirming treatment, the American Academy of Child and Adolescent Psychiatry said, “Blocking access to timely care has been shown to increase youths’ risk for suicidal ideation and other negative mental health outcomes.”

More broadly, in an official position paper in 2018, the American Psychiatric Association said there was “significant and longstanding medical and psychiatric literature” demonstrating “clear benefits of medical and surgical interventions” for transgender people.

“When that discrimination is given a bill number, it can be devastating,” Mx. Brinton said, citing research indicating that young trans and nonbinary people who reported experiencing discrimination based on their gender identity were twice as likely to have attempted suicide, and that those who reported having at least one “gender-affirming space” — which could be a doctor’s office — were 25 percent less likely to have attempted suicide in the past year.

Mr. Hutchinson’s veto was striking not only because he is a Republican, but also because just last month he signed bills that allowed doctors to refuse to treat people based on religious or moral objections and that barred transgender women and girls from competing on women’s sports teams in high school or college. (Such measures have become popular among conservative lawmakers, who have introduced them in more than two dozen states this year.)

He argued that H.B. 1570 was “overbroad, extreme and does not grandfather those young people who are currently under hormone treatment,” and said, “The state should not presume to jump into the middle of every medical, human and ethical issue.”

His speech was hardly a ringing affirmation of transgender rights: He said he would have signed the bill if it had prohibited only gender-affirming surgeries, and urged legislators to pass a more “restrained” version.

Even so, Mx. Brinton of the Trevor Project said the veto and Mr. Hutchinson’s accompanying statement were “a big, big deal.”

“The governor openly said trust the parents, trust the young person, trust their medical professionals,” Mx. Brinton said. “If we could be allowing that level of trust in states across the country, we would have more L.G.B.T.Q. youth going to sleep tonight not with fear and nightmares, but rather celebration and relief. That is what is happening in Arkansas tonight.”

Does Jan. 6 Disqualify Some Republicans From Re-election?

What an Antisemite’s Fantasy Says About Jewish Reality