Year-over-year percent changes were expected to jump because price indexes dropped sharply a year ago.,

Consumer prices rose in March at their fastest pace in nearly nine years, an increase that may fuel inflation fears but that likely overstates the extent of the acceleration.

The Consumer Price Index, a closely watched inflation measure, rose 0.6 percent in March from February, the Labor Department said Tuesday. That was up from February’s 0.4 percent increase, and a bit faster than economists’ expectations.

Prices at the pump drove the increase: Gasoline prices rose 9.1 percent in March.

Core inflation, which ignores volatile food and energy prices, rose 0.3 percent, up from 0.1 percent in February.

Prices were up 2.6 percent from a year ago. But that measure — usually closely watched by economists — was skewed by the comparison to March 2020, when prices fell as consumers pulled back spending in the face of the pandemic.

FROM A YEAR AGO

However, some of the jump can be explained

through what’s known as base effects — prices fell

significantly last spring, so the increase now from the

year prior is larger, even if prices are not rising as 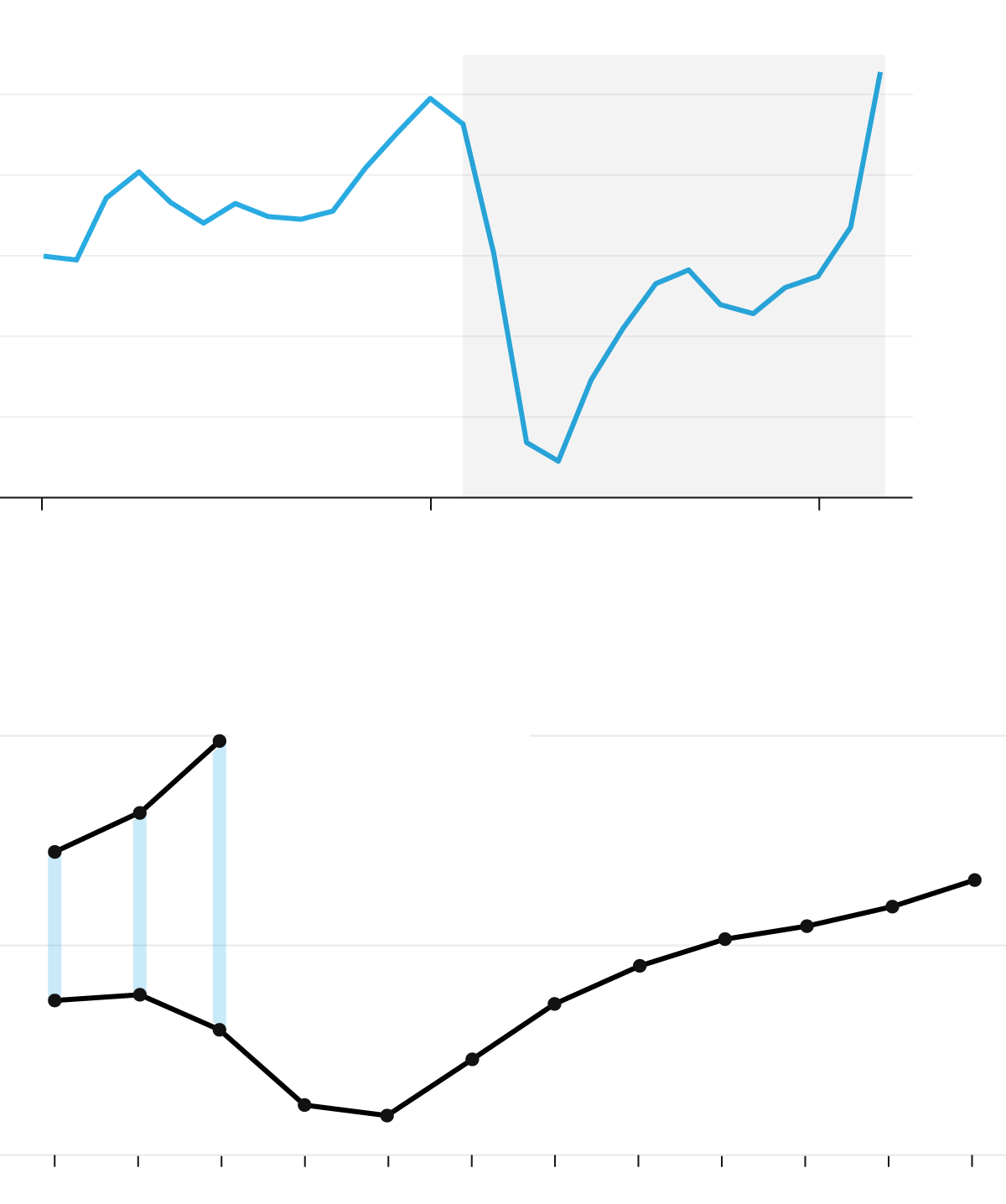 PRICE INDEX FROM A YEAR AGO

However, some of the jump can be explained through what’s known as base effects —

prices fell significantly last spring, so the increase now from the year prior is larger, even

if prices are not rising as dramatically. 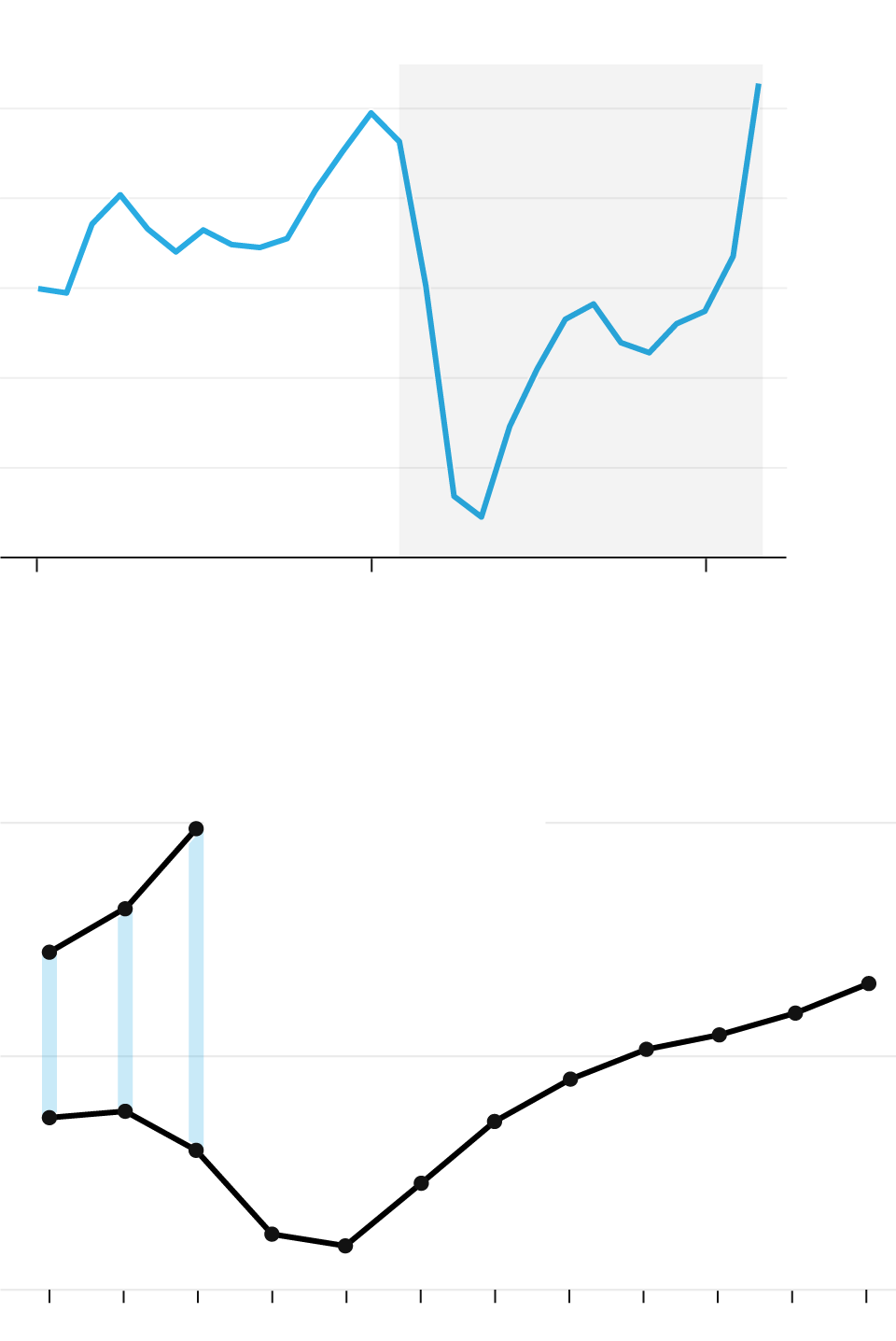 FROM A YEAR AGO

However, some of the jump can be explained through what’s known as base effects — prices fell significantly last spring, so the increase now from the year prior is larger, even if prices are not rising as dramatically.

Economists surveyed by Bloomberg expected an increase of 0.5 percent in overall C.P.I. from February, and 2.5 percent from March 2020.

Inflation data matters because it gives an up-to-date snapshot of how much it costs Americans to buy the goods and services they regularly consume. And because the Federal Reserve is charged in part with keeping increases in prices contained, the data can influence its decisions — and those affect financial markets.

Consumer inflation is measured by statisticians who take a bundle of goods and services Americans buy — everything from fresh fruit to rent — and aggregate it into a price index. The inflation rate that is reported each month shows how much that index changed.

Why the annual rate may overstate the situation.

For a quarter century, most measures of inflation have held at low levels. The C.P.I. moves around a bit because of volatile food and fuel prices, but a “core” index that strips out those factors has mostly increased at a year-over-year rate of less than 2 percent.

But the data reported for March reflects a drop in prices last year, as the country went into lockdown and airlines slashed ticket costs, clothing stores discounted sweaters, and hotels saw occupancy plunge.

That means inflation measures are lapping low readings, and as that low base falls out, it will cause the year-over-year percent changes to jump — a little bit in March, and then a lot in April.

To be sure, climbing prices could last for a while as businesses reopen, consumers spend down big pandemic savings and producers scramble to keep up with demand. Economists and Federal Reserve officials do not expect those increases to persist for more than a few months, but if they did, it would matter to consumers and investors alike.

Democrats Hammer Out Plan to Tax Billionaires and Corporate Giants