Mayor Lori Lightfoot called for calm before the body camera footage was made public. The victim, Adam Toledo, was one of the youngest people killed by the police in Illinois in years.,

In the early morning hours of Monday, March 29, in Little Village, a Chicago police officer shot and killed a 13-year-old boy that we now know was Adam Toledo. The body-worn camera and pod camera and other video and audio footage which captured the events leading up to and including the shooting will be released to the public. Two facts about this tragedy remain clear. First, in the middle of the night, this child was in contact with an adult who had a gun, and then ended up being shot and killed by a police officer. We live in a city that is traumatized by a long history of police violence and misconduct. So while we don’t have enough information to be the judge and jury of this particular situation, it is certainly understandable why so many of our residents are feeling an all too familiar surge of outrage and pain. And it’s even clearer that trust between our communities and law enforcement is far from healed and remains badly broken. This lack of trust makes it even more difficult for many of us to wait and hear all the facts before making up our mind in tragedies about this. But again, I urge — I urge each resident who cares and loves this city, let’s wait until we hear all the facts. 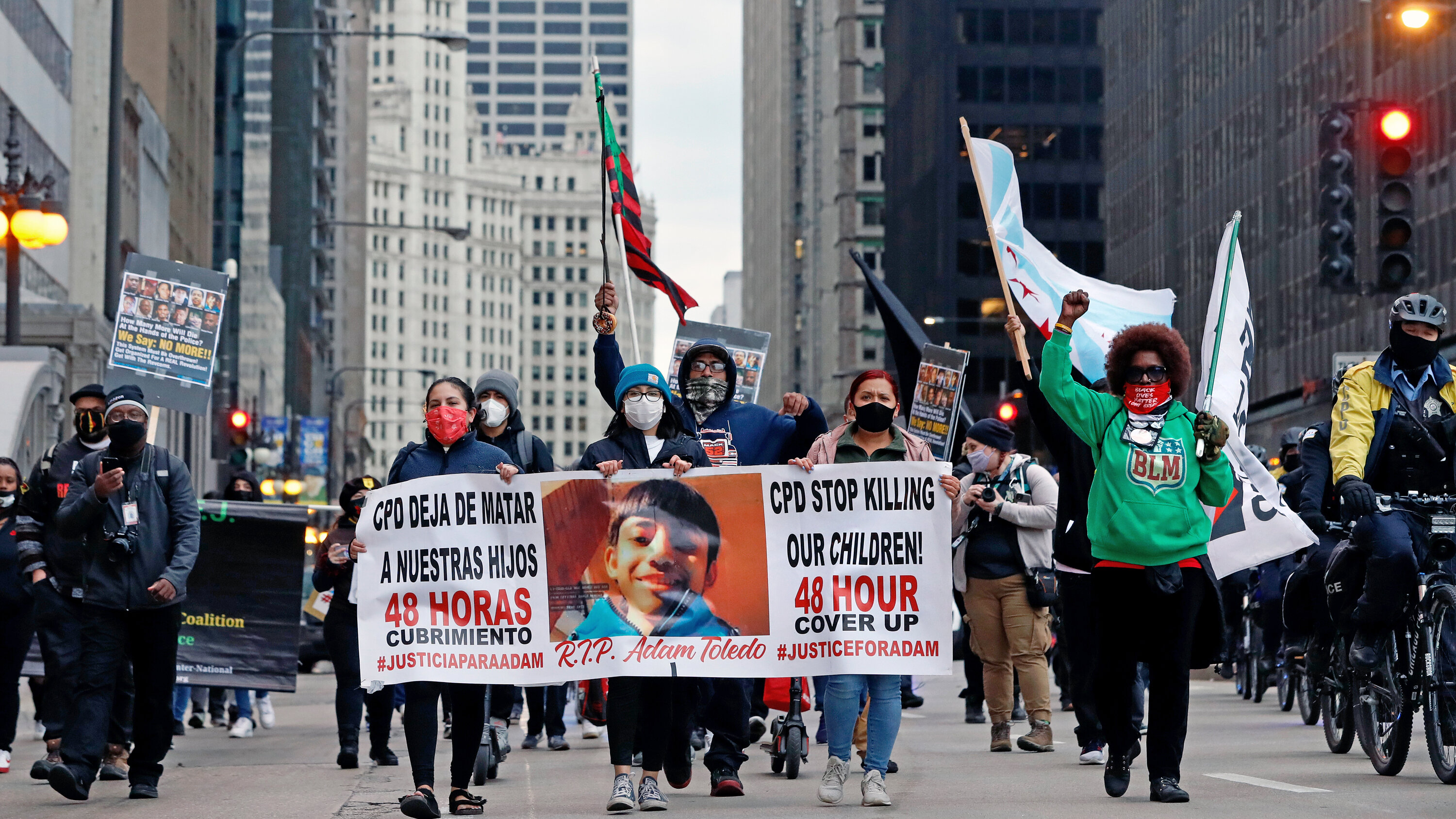 By Julie Bosman and Neil MacFarquhar

CHICAGO — A shaky, fast-moving video released in Chicago on Thursday shows a police officer chasing a boy down a dark alleyway, yelling at him to stop. “Stop right now!” the officer screams while cursing, telling him to drop his gun. “Hands. Show me your hands. Drop it. Drop it.”

As the boy turns and lifts his hands, a single shot rings out and he collapses. The boy, Adam Toledo, was killed. He was 13.

Release of the officer’s body camera footage set off a fresh round of consternation over police conduct in Chicago, even as it stirred debate over what the images — grainy and graphic — actually showed. As activists announced protests against police abuse for downtown Chicago on Thursday evening, Mayor Lori Lightfoot urged calm, even as she grew emotional as she talked about Adam’s death and her own pain in watching the video, calling it “excruciating.”

Adam, who lived in Chicago’s Little Village neighborhood on the city’s West Side, was one of the youngest people killed by the police in Illinois in years.

Graphic videos of deaths at the hands of police officers have repeatedly roiled the nation since last May. The video’s release in Chicago comes as the trial of Derek Chauvin, a former Minneapolis police officer accused of murdering George Floyd, is underway and as another Minnesota officer, Kimberly A. Potter, was charged in the fatal shooting of Daunte Wright, a 20-year-old motorist.

In the shooting in Chicago, which took place in the early-morning hours of March 29, officials have said that two officers were responding to reports of gunfire when they saw two people in an alley and started to chase them. Prosecutors have said that Adam was holding a gun when he ran down the alley as an officer commanded him to stop and drop the weapon.

The video — the key section of which takes place in a matter of about one second — leaves significant questions about the sequence of events. Adeena Weiss Ortiz, a lawyer representing the Toledo family, said at a news conference on Thursday that the video shows that Adam was attempting to comply with the officer’s orders.

“He tossed the gun,” she said. “If he had a gun, he tossed it. The officer said, ‘Show me your hands.’ He complied. He turned around.”

The New York Times slowed down the police video, as well as a second video released by the authorities. As the officer, identified in police reports as Eric E. Stillman, 34, fires the single shot, Adam is raising his arms and appears to be empty-handed. In the moments before the shooting, the Times’s analysis shows, Adam can be seen holding what appears to be a gun, which he drops behind a wooden fence just before he raises his hands.

The Civilian Office of Police Accountability, an independent agency that investigates police shootings in Chicago, released the video on Thursday afternoon after initially resisting making it public, citing Adam’s age. COPA is investigating the use of force and Officer Stillman has been placed on administrative duties for 30 days.

The Chicago Police Department had no comment on the video other than redistributing its news release about the shooting from April 1, which called the loss of life “tragic” and said the department would cooperate with COPA.

As the images spread on social media, community activists and others expressed anger. Some said the officer had no reason to fire at the boy.

“It was hard to watch,” said Baltazar Enriquez, the president of Little Village Community Council, saying that he considered the shooting to be murder. “Adam raises his hands and then he shoots him.”

Mr. Enriquez said demonstrations were planned for Thursday and Friday evening, with residents demanding that money spent on the police budget be diverted to community programs instead. “Everybody is extremely angry,” he said. “We don’t need angry officers. We need social workers.”

Adam’s family was permitted to view the video privately on Tuesday night. Afterward, the family issued a statement calling the experience “extremely difficult and heartbreaking for everyone present.”

Hours before the video was released, Ms. Lightfoot issued an emotional appeal for calm. “We must proceed with deep empathy and calm and importantly, peace,” she said, her voice breaking as she talked about the pain of losing a child to gun violence. “No family should ever have a video broadcast widely of their child’s last moments, much less be placed in the terrible situation of losing their child in the first place,” she said.

Ms. Lightfoot said the outrage and pain that people were feeling in Chicago were compounded by both the Chauvin trial and a recent police shooting in a Minneapolis suburb.

Mr. Floyd’s death last year provoked demonstrations across the country over police misconduct and racism. Those sentiments have resurfaced during the trial, where dramatic video footage was replayed of Mr. Floyd gasping “I can’t breathe” while he was pinned under Mr. Chauvin’s knee. Nightly protests have erupted anew in nearby Brooklyn Center after another police shooting that was captured on body camera video — the fatal shooting of Mr. Wright after he was pulled over for an expired registration.

In Chicago, even before it was made clear the video would be released, Adam’s killing had set off protests and severe criticism of the Chicago Police Department. Ms. Lightfoot repeated her appeal that the department create a better policy for foot patrols that too often proved dangerous to suspects, the police and bystanders.

Before the video was released, a few details of the events that led to Adam’s death emerged in court. Ruben Roman, a 21-year-old who the authorities said was with Adam at the time of the shooting, appeared in a Cook County courtroom on Saturday. He was charged with felony reckless discharge, unlawful use of a weapon and child endangerment, and held on a $150,000 bond.

According to prosecutors, video captures Mr. Roman and Adam walking together down a street on the West Side around 2:30 a.m. Mr. Roman, holding a gun, appears to fire several shots at an unknown target.

Adam’s mother later said she thought he was safely in his room at the time. Adam, a seventh-grader at Gary Elementary School, had been missing for several days, she said, but had come home and gone into the room that he shared with his brother.

The shooting tapped into a tide of anguish and frustration in Chicago neighborhoods that have been gripped by gun violence. Chicago, like other American cities, has struggled to stem a surge in shootings during the coronavirus pandemic. In the first quarter of 2021, there were 131 homicides, the most violent start to a year since 2017.

That follows a particularly violent 2020, with almost 800 murders, after 492 in 2019, according to Chicago police records. The city experienced 567 murders in 2018 and 658 in 2017. As murders climbed last summer, children were often caught in the crossfire; in one two-week period, nine children were killed.