Whether you’re a lifelong fan or an outsider who doesn’t know your Manchesters from your Madrids, we’ve got answers to your pressing questions.,

A little more than a year after European soccer found a renewed sense of unity in the face of the coronavirus pandemic, the sport now faces its greatest crisis in a generation.

Late on Sunday night, 12 of the world’s biggest soccer clubs unveiled a plan to launch what they called the Super League, a closed competition in which they (and their invited guests) would compete against one another while claiming even more of soccer’s billions of dollars in revenue for themselves.

The announcement cast doubt not only on the ongoing viability of the Champions League — the sport’s showpiece club competition — but also called into question the very future of the domestic leagues that have been soccer’s cornerstone for more than a century.

All of a sudden, it is not clear where soccer is heading, or what it will look like when it gets there. Here, then, is what we know so far.

First things first: What is a Super League?

The concept has been around for decades: a Continental competition that incorporates all of the most famous names from the Europe’s domestic leagues every year into an event all their own. For a long time, it has effectively been something between an aspiration and a threat. Sunday night, though, was the first time anyone had given it a physical form.

Who gets to play in it?

So far, there are 12 founding members. The teams that have been the driving force behind the project — Real Madrid, Manchester United, Liverpool and Juventus — have kindly invited eight other clubs to join them: Barcelona and Atletico Madrid from Spain, Inter Milan and A.C. Milan from Italy, and the rest of the Premier League’s self-appointed Big Six: Manchester City, Chelsea, Tottenham and Arsenal.

They expect to be joined soon by three more permanent members, though it is not clear yet why those teams have yet to disclose their involvement. Paris St.-Germain in France and the Portuguese giant F.C. Porto were seen as likely candidates, but both have distanced themselves from the project. The organizers are eager to have a team like Bayern Munich, the reigning European champion and one of the world’s biggest clubs, but on Monday, Borussia Dortmund’s chairman said that not only was his team out but also that Bayern agreed with his position.

Whatever the final roster, those 15 founding teams will form the league’s bedrock. The full allotment of 20 clubs each season will be fleshed out by a rotating cast of five more teams, chosen through some sort of formula that the organizers haven’t gotten around to deciding just yet.

It does, to be fair. But the roster for the Champions League is set each year based on clubs’ performance in their domestic leagues. The Super League will have permanent members who face no risk of missing out on either the matches or the profits. 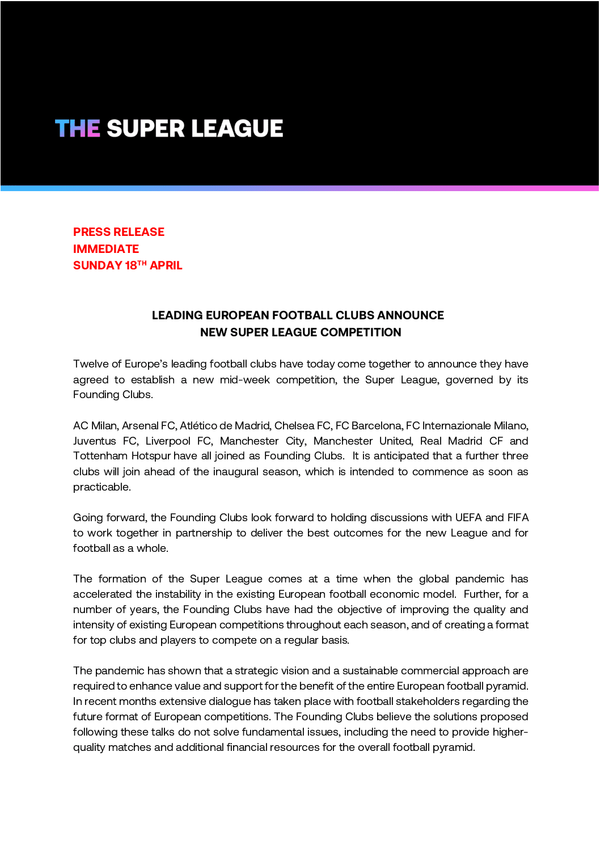 Twelve leading European soccer clubs have confirmed their plans to form a breakaway league. Here’s the statement they issued on Sunday.

How will it work?

The 20 teams will be split into two divisions — 10 teams in each — and then play one another home-and-away. At the end of the regular season, the top four clubs in each division will progress to a knockout round that will be familiar to viewers of the Champions League. The difference is that those playoffs will be held over the course of four weeks at the end of the season.

Is this about money?

Yes. According to their own estimates, each founding member stands to gain around $400 million merely to establish “a secure financial foundation,” four times more than Bayern Munich earned for winning the Champions League last season.

But that is just the start, really: The clubs believe that selling the broadcast rights for the Super League, as well as the commercial income, will be worth billions. And it will all go to them, rather than being redistributed to smaller clubs and lesser leagues through European soccer’s governing body, UEFA. At the same time, the value of domestic leagues and their clubs will diminish drastically as they are effectively rendered also-rans every year.

Won’t the Super League teams fight over all that money?

The founding members have decreed that spending on transfer fees and wages will be capped at a certain percentage of revenue, which — theoretically at least — gives owners far more chance to restrict their spending at the same time as they are maximizing their income.

Sounds good for those clubs. Their fans must be happy?

Not so much, no. The reaction has been one of spittle-flecked rage at the betrayal of tradition. It does not help that, though several of the clubs have released statements insisting they will consult with fan groups as the project develops, nobody thought to do that ahead of time.

It is hard, though, to be sure how universal the sense of outrage and betrayal is. There is a little evidence — though it is hardly overwhelming — of a demographic split in the reaction to the idea, and it may be that this is what the clubs are banking on: that older fans may be more wedded to tradition, and younger ones may be won over more easily.

Can my club join?

Not really. It might, perhaps, perform well enough in its domestic league to win one of the five guest spots in the Super League each season, though details on how the 53 teams who win one of Europe’s domestic championships ever year will be whittled down to five are thin.

But even then, the odds will be stacked against them: The permanent members will have access to the competition’s commercial revenue, giving them a substantial financial advantage against everyone else.

Why is this happening now?

The easy answer is that the pandemic has cost all of Europe’s clubs — including, and to some extent particularly, the wealthy elite — hundreds of millions of dollars in lost revenue. The super league is designed, to some extent, to offset that.

But this idea has been around for a while, and it has been gathering strength over the last five years or so. There are a host of factors behind that, ranging from the financial primacy of the Premier League and the arrival of a swath of American owners into that sport to what appears to be a plateau on the sale of television rights for the domestic leagues. There is also a mounting belief that, since the big clubs drive the bulk of the revenue, they should receive an even greater share of it.

Can anyone stop it?

That remains to be seen. UEFA, in conjunction with the various affected national leagues and associations, has vowed to use any measure available to stop the “cynical” breakaway. That could mean throwing the clubs out of domestic leagues, banning their players from representing their countries.

On Monday, UEFA’s president, Aleksander Ceferin, sounded ready for a scorched-earth fight when he called the renegade clubs “snakes and liars.” But he also seemed to leave the door open for them to return if they abandoned plans that he said were based in “greediness, selfishness and narcissism.”

All of the choices at his disposal — and the leagues’ — carry a risk, though. Ejecting the biggest clubs in soccer from domestic leagues makes sense: After all, allowing them to play on would not only distort the competition financially — they already have deeper pockets; this would effectively give them a spare pair of trousers — but in a sporting sense, too. Why would they field full-strength teams? Would a championship mean anything?

But doing so would only make a wholesale breakaway more likely, which would, in turn, make those domestic leagues left behind even less attractive. Television rights for a Premier League stripped of Manchester United and Liverpool, for example, are not likely to be worth quite so much anymore. La Liga rights without Real Madrid, Atletico and Barcelona are another matter entirely.

It is possible that FIFA might step in, and issue the ultimate sanction on players who take part in a Super League: barring the players from representing their countries at the World Cup. Even that, though, may not be decisive, given the salaries they could earn in the Super League.

More likely is the intervention of various national governments, or possibly the European Union — though on what grounds they would object is not entirely clear — or a draining fight through various courts until the last legal recourse has been exhausted.

Is this a situation where the only winners are lawyers?

Not quite. The big clubs clearly believe the chance not only to increase their income but to control their expenditure is worth it. Their conviction that this is a chance to give fans more of what they want should probably not be dismissed entirely. It is hardly irrational to believe that regular games between some of the sport’s most famous names will attract an audience.

But there are far more people who lose, right?

Yes. By some distance. UEFA now faces the prospect of its showpiece competition being devalued. The national leagues would be rendered largely irrelevant, and even the national associations — the people who actually run soccer — would be helpless bystanders.

But others would suffer more: the clubs who have been excluded, of course, and would now be deprived not just of appeal and audience and income but hope, too; Europe’s minor leagues, cast yet further into shadow; even players, who might find their negotiating position on salary weakened by the super clubs’ ability to cap wages.

Most of all, it would explode the idea that anyone can, in theory, rise and fall on their own sporting merit. That may not be true in any real sense any more, and its absence may not hold back the major leagues in North America, but it is central to soccer’s identity and mythology.

As things stand, nothing is off the table. A long, unseemly legal quarrel seems unavoidable. The breakaway clubs have already filed papers designed to protect their interests, and their plans.

So it is going to happen?

That is difficult to answer with any certainty. There is still a suite of obstacles between here and there. And, crucially, it is hard to see how the clubs can back down at this point: This is no act of brinkmanship, as previous suggestions of a super league have been, to elicit more control or more money from UEFA.

They have invested far too much capital in the project, even in the last 24 hours, to turn back. A couple of the founding clubs — principally Barcelona and Real Madrid, both in theory owned by their members — may yet have internal power struggles to win, but it would be surprising if that had not figured in their thinking.

The absence of teams from France and Germany, including P.S.G. and Bayern Munich, gives UEFA some hope that it can deprive the new league of legitimacy from the outset. And it is possible the furious reaction will give some teams pause for thought: It is telling, for example, that as yet none of the plan’s chief architects have come out to defend it.

There is one more test, of course: What happens if it launches and does not work, or at least does not work in the way the teams envisage? What if there are limits to the loyalty of fandom? They are banking on that not being the case, of course, but they do not know for certain.

Jim Justice’s Basketball Dreams Are Blocked. And He Is Crying Foul.