Kim Potter Will Be Charged With Manslaughter in Daunte Wright Killing

Kimberly A. Potter, who resigned from the Brooklyn Center Police Department, was arrested on Wednesday.,

Minnesota officer who killed Daunte Wright will be charged with manslaughter.

By Nicholas Bogel-Burroughs and Julie Bosman

BROOKLYN CENTER, Minn. — The white Minnesota police officer who fatally shot Daunte Wright, a 20-year-old Black man, after appearing to mistake her handgun for her Taser will be charged with second-degree manslaughter, a prosecutor said on Wednesday, following three nights of protests over the killing.

The planned charge against the officer, Kimberly A. Potter, was announced a day after she and the police chief both resigned from the Brooklyn Center Police Department. Hundreds of people have faced off with the police in Brooklyn Center each night since Mr. Wright’s death, demanding that the former officer be charged, and residents across the region are preparing for a verdict next week in the trial of Derek Chauvin, the former Minneapolis officer charged with murdering George Floyd.

Pete Orput, the top prosecutor in Washington County, said in an email to The New York Times that the complaint would be filed later on Wednesday. Ms. Potter’s lawyer, Earl Gray, did not respond to a request for comment.

The Bureau of Criminal Apprehension, the state agency that investigates police killings in Minnesota, said that Ms. Potter had been arrested and taken into custody on Wednesday morning and would be booked into the Hennepin County Jail.

Ben Crump, a lawyer for the Wright family, said in a statement: “While we appreciate that the district attorney is pursuing justice for Daunte, no conviction can give the Wright family their loved one back. This was no accident. This was an intentional, deliberate, and unlawful use of force.”

Ms. Potter, 48, worked for the Police Department for 26 years and was training other officers on Sunday afternoon when they pulled Mr. Wright’s car over. Officials have said that he had an expired registration on his car and something hanging from his rearview mirror. When officers found that Mr. Wright had a warrant out for his arrest and attempted to arrest him, he twisted away and got back into his car.

Ms. Potter warned that she would use a stun gun on him and then shouted “Taser!” three times before firing a bullet into his chest, killing him. “I just shot him,” Ms. Potter can be heard saying, in body-camera footage that was released on Monday. Tim Gannon, who resigned as chief of police, described the killing as an “accidental discharge.”

Under Minnesota statutes, second-degree manslaughter can apply in cases where someone has created “unreasonable risk” and kills another person through their negligence. The maximum punishment for a second-degree manslaughter conviction is 10 years in prison, though sentencing guidelines call for about four years for someone with no criminal history.

For several nights, the death of Mr. Wright has brought hundreds of people to the police station in Brooklyn Center, a Minneapolis suburb, where they have been met by Minnesota National Guard members and State Patrol troopers who have fired tear gas, rubber bullets and other projectiles at the crowd. Some of the demonstrators have launched fireworks and thrown rocks and bottles of water at the police. Officers arrested 79 people on Tuesday night. Dozens of businesses in the region were broken into earlier in the week.

Katie Wright, Mr. Wright’s mother, has said that Mr. Wright called her after the police had pulled him over and said that they had stopped him because of an air freshener dangling from his rearview mirror. She said he had been driving with his girlfriend at the time, and that she could hear “fear in his voice” when he called. Mr. Wright was the father of Daunte Jr., who is almost 2.

Relatives and friends of Mr. Wright have mourned during vigils in recent days; among those in attendance was Courteney Ross, Mr. Floyd’s girlfriend, who was a former teacher of Mr. Wright’s.

The local government in Brooklyn Center, a city of about 30,000 people, has also been in crisis. The City Council gave the mayor more authority in the wake of Mr. Wright’s death and the city manager, who had previously overseen the Police Department, was fired.

The Bureau of Criminal Apprehension, a state agency that investigated Mr. Floyd’s death in May, has led the inquiry into the killing. 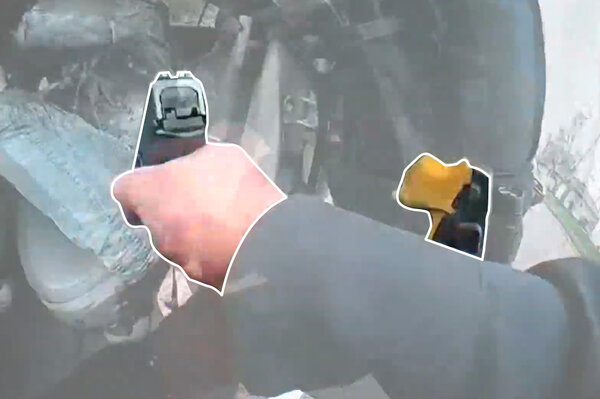 How Could an Officer Mistake a Gun for a Taser?

The police say the officer who fatally shot Daunte Wright intended to fire a Taser. The weapon looks different from a gun, and officers are trained not to confuse the two. But tragic errors occur anyway.