How the Coronavirus Variants Are Spreading in New York City

The number of new coronavirus cases in New York City has remained alarmingly, and stubbornly, high for weeks, even as tens of thousands of people are vaccinated daily.

A likely reason is that more contagious variants have displaced the original forms of the virus, public health officials have said, accounting for more than 75 percent of new cases, according to a recent analysis.

Each week, the Health Department releases the results of a sampling of up to 1,500 sequenced cases, providing a citywide snapshot of which variants are on the rise.

Until this week, the city had not said which variants were more common in which neighborhoods. But newly available ZIP code-level data provides some insight into the mix of variants circulating in the area.

The information serves as a vivid reminder that the dynamics of New York’s epidemic have changed over the past few months, and that the original forms of the virus are increasingly unusual across the city.

“It makes something that’s been pretty abstract and maybe less accessible that much more tangible to people,” Dr. Denis Nash, an epidemiologist at the CUNY Graduate School of Public Health and Health Policy, said of the data. “The landscape is changing quickly.”

The variants are spreading

A variant first discovered in New York, B.1.526, has spread more widely in the city than all of the others so far. There has also been a significant increase in cases linked to the B.1.1.7 variant, which was first detected in Britain last year and now makes up nearly 30 percent of new cases sequenced in New York City.

The B.1.1.7 variant has driven new surges of sickness from Poland to Michigan. It is estimated to be 60 percent more contagious and two-thirds more deadly than the original form of the virus. This variant is now the main source of new infections across the United States and in Europe.

But not in New York City, where B.1.526 remains the most prevalent variant, comprising about 45 percent of cases sequenced from the fourth week of March. 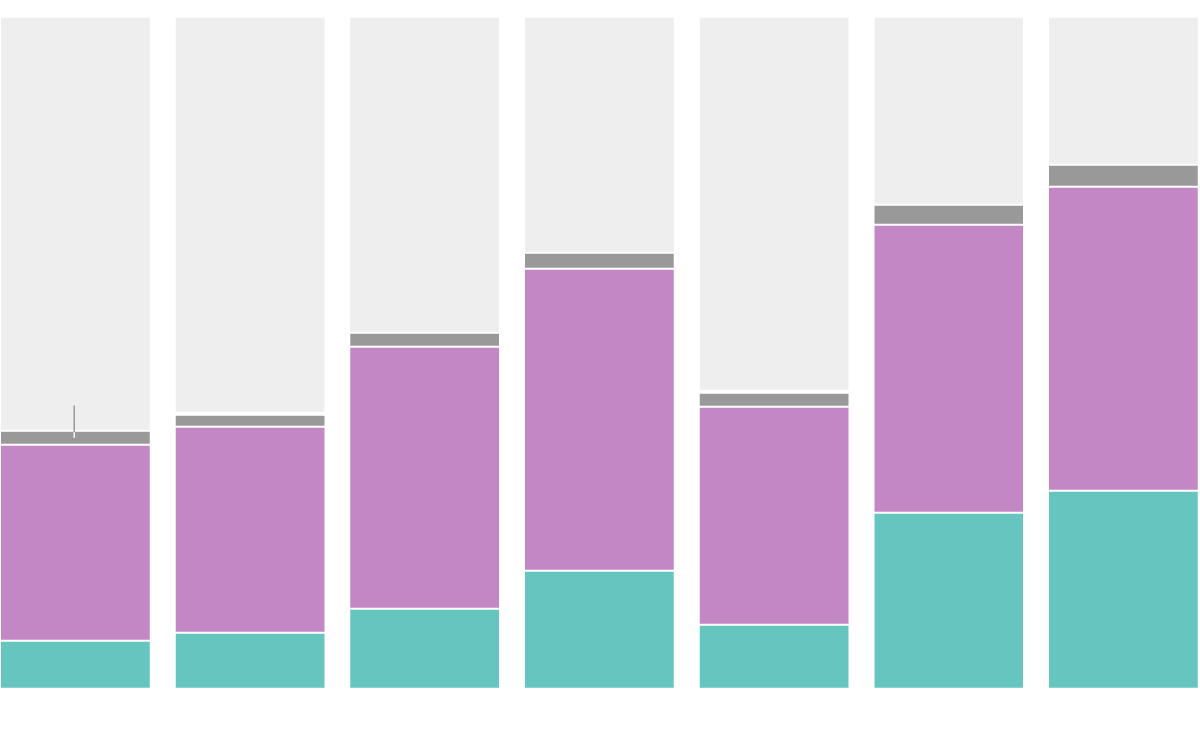 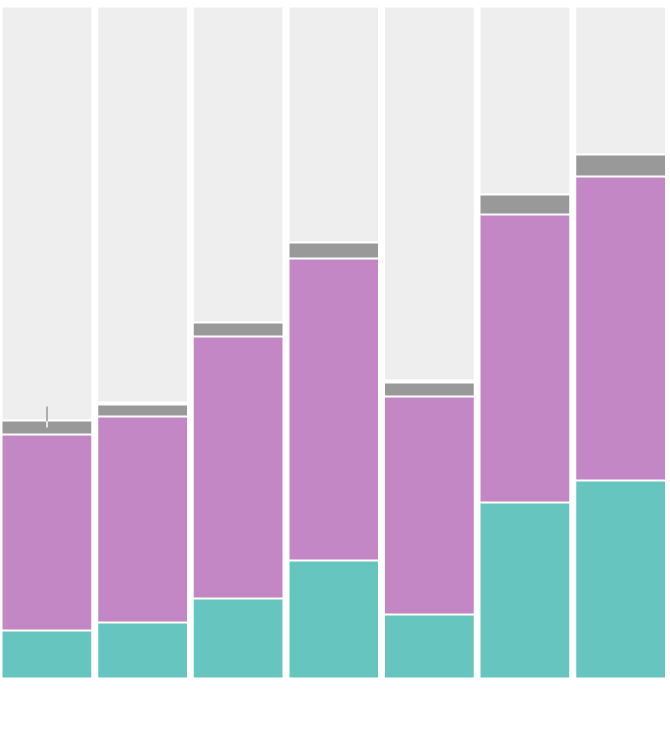 Many questions about B.1.526, such as whether it causes more severe illness or can evade the protection granted by the vaccines, remain unanswered.

As to which is more contagious — B.1.1.7 or B.1.526 — health officials are not yet sure. “We don’t have enough information to discern this at this moment,” said the city’s health commissioner, Dr. Dave Chokshi.

One of the few places where B.1.1.7 appears responsible for the majority of cases was along the southern tip of Staten Island, which has struggled with high case loads for months and currently has some of the highest positivity rates in the city.

Despite the dominance of variants, hospitalizations have not been rising in the city in recent weeks, and are actually on a slight decline. And cases have been stable, though at a high level. “To me that is reassuring,” said Dr. Wafaa El-Sadr, an epidemiologist at Columbia University’s Mailman School of Public Health. “We may be seeing the beginnings of a vaccine effect.”

The data has limitations

In a given week, about one to two thousand positive coronavirus cases in New York City are sequenced — that is, the genetic material of the virus is examined for mutations. That represents roughly between four and eight percent of New York City’s new cases. The majority of those cases are sequenced at a laboratory in Long Island City operated by Opentrons, a robotics company.

At the request of The Times, the company’s chief executive, Jonathan Brennan-Badal, shared ZIP code-level data for about 7,500 sequenced cases, explaining that the information could help identify where the need for more resources — including testing and vaccinations — was greatest.

The city Health Department uses the sequences from this laboratory, known as the Pandemic Response Lab, as the basis for its weekly sample gauging the prevalence of each variant.

But even with thousands of samples sequenced, the data still has significant limitations. Most of its coronavirus samples come from the city’s public hospital system and city-sponsored testing sites. It receives lots of samples from some neighborhoods, but few from others.

“The limited number of variants sequenced up till now make it difficult to arrive at conclusions as to whether some neighborhoods are more severely affected than others,” Dr. El-Sadr said.

Each dot on the density maps above is placed in the ZIP code of a New Yorker whose coronavirus sample was sequenced at the Opentrons lab. But neighborhoods with lots of dots do not necessarily correspond with coronavirus hot spots. The density of dots can often be explained by the presence of a city testing center nearby.

On the other hand, neighborhoods with few dots are not necessarily free of variants. It just means few coronavirus samples from there reached the lab.

There are blind spots across the Bronx, Queens and the southern half of Manhattan. In some ZIP codes too few samples have been sequenced to draw any solid conclusions. In Roosevelt Island, for example, only one case has been sequenced.

The city on Monday separately released a report based on ZIP-code level data from the Pandemic Response Lab, as well as from the city’s own lab. It also showed the proportion of B.1.1.7 and B.1.526 cases growing rapidly.

How is this information useful?

City officials said that the maps showed widespread transmission of the variants, and that they were an important reminder for people not to let their guards down in any neighborhood.

“The single best way we can address this threat is by vaccinating everyone as quickly as possible,” said Dr. Jay Varma, a senior adviser on public health in the mayor’s office. “The reality is you are at risk of any of these no matter where you are.”

Dr. Chokshi said that the geographic breakdown of variants illustrated where the variants had been detected and how widespread they were across the city, questions health officials had been asking for weeks.

Monitoring clusters in certain neighborhoods could lead to insights about variants that so far have remained somewhat of a mystery to health officials.

Because B.1.526 appears to have emerged locally in New York City, Dr. Nash said he would expect that it would circulate more in areas with high levels of community transmission.

Throughout the pandemic, these have tended to be poorer swaths of the city, where living conditions are more crowded and jobs have required showing up in person. The map largely bears that out.

In an inverse effect, vaccination rates also tend to be lower in harder hit neighborhoods that have had more community transmission during the pandemic. Some of this is because of vaccine hesitancy, and some because of access issues. The city has been trying to address this with targeted vaccination campaigns.

Not all variants are the same

The abundance of variants being detected in the city has created a complicated challenge for health officials.

Some variants — such as the ones first found in Brazil, P.1, and South Africa, B.1.351, that are now popping up in small numbers in New York — carry a mutation that appears to allow the virus to partially evade antibodies from prior infection. The variant first found in South Africa also appears to make vaccines less effective.

The variant first detected in New York, B.1.526, appears to come with two forms of mutation.

More than half of the B.1.526 circulating in New York City now carries a mutation similar to ones carried by the variants discovered in South Africa and Brazil, according to the New York City Health Department.

Another version of the variant, researchers say, contains a different mutation, which may help the virus bind more tightly to human cells and may make it more contagious. However, there is no real-world evidence yet that B.1.526 results in more severe infection, or is more likely to evade antibodies from prior infections or vaccines, though it is being studied, city officials said.

The P.1 variant, which has been linked to a surge of cases in Brazil, has been detected about two dozen times in New York City between March 16 and April 1, mainly in Queens. A handful of cases of B.1.351 have been found mostly on Staten Island in recent weeks.

“It’s just a reminder that not only are we interconnected in the city, but we are interconnected around the world,” said Dr. Nash, “and what happens there can happen here too, if we are not careful.”