The Federal Reserve said it could soon slow its large-scale purchases of government-backed debt and indicated it might raise interest rates in 2022.,

Federal Reserve officials indicated on Wednesday that they expect to soon slow the asset purchases they have been using to support the economy and predicted they may raise interest rates next year, sending a clear signal that policymakers are preparing to pivot away from full-blast monetary help as the business environment snaps back from the pandemic shock.

“If progress continues broadly as expected, the Committee judges that a moderation in the pace of asset purchases may soon be warranted,” the policy-setting Federal Open Market Committee said in its September statement. The new phrasing eliminated wording that had promised to assess progress over “coming meetings,” suggesting that a formal announcement of the slowdown could come as early as the central bank’s next gathering in November.

Fed officials confront a complicated backdrop nearly 20 months after the coronavirus pandemic first shook the American economy. Business has rebounded as consumers spend strongly, helped along by repeated government stimulus checks and other benefits. But the virus persists and many adults remain unvaccinated, preventing a full return to normal.

External threats also loom, including tremors in China’s real estate market that have put financial markets on edge. In the United States, partisan wrangling could imperil future government spending plans or even cause a destabilizing delay to a needed debt ceiling increase.

Fed Chair Jerome H. Powell and his colleagues are navigating those crosscurrents at a time when inflation is coming in high and the labor market, while healing, remains far from full strength. They are weighing when and how to reduce their monetary policy support, hoping to prevent an economic or financial market overheating while keeping the recovery on track.

“The sectors most adversely affected by the pandemic have improved in recent months, but the rise in Covid-19 cases has slowed their recovery,” the Fed said in its Wednesday statement.

The Fed has been holding interest rates at rock bottom since March 2020 and is buying $120 billion in government-backed bonds each month, policies that work together to keep many types of borrowing cheap. That has fueled lending and spending and boosted economic growth. Officials have signaled that slowing bond purchases will be their first step toward a more normal policy setting.

Mr. Powell, speaking during a news conference after the meeting, said that Fed officials expect the economy to continue to grow strongly and that the central bank would continue to provide support for as long as is needed. But he indicated that policymakers believe it will soon be time to slow down their bond purchases, saying bluntly that a plan to do so could be announced could come as soon as November.

“Our asset purchases have been a critical tool,” Mr. Powell said, adding that Fed officials believe the economy has made enough progress toward the central bank’s goals of full employment and stable inflation that it may make sense to begin paring back those purchases “if progress continues.”

“My own view would be that the substantial further progress test for employment is all but met,” Mr. Powell said. “I think if the economy continues to progress broadly in line with expectations, and also the overall situation is appropriate for this, I think we could easily move ahead at the next meeting — or not, depending on whether we think those tests are met.”

Policymakers also discussed the pace of the slowdown in asset purchases, Mr. Powell said, with officials largely expecting the overall bond-buying program to conclude around the middle of next year.

“They want to start the exit,” said Priya Misra, global head of rates strategy at T.D. Securities. “They’re putting the markets on notice.”

The central bank is trying to separate its plans for the federal funds rate — the Fed’s more traditional and more powerful policy tool — from its approach to bond purchases. Mr. Powell has said that key rate is likely to remain low for some time.

Officials released a fresh set of economic projections on Wednesday, laying out their predictions for growth, inflation and the funds rate through the end of 2024. Those included the so-called “dot plot” — a set of anonymous individual estimates showing where each of the Fed’s 18 policymakers expect their interest rate to fall at the end of each year. 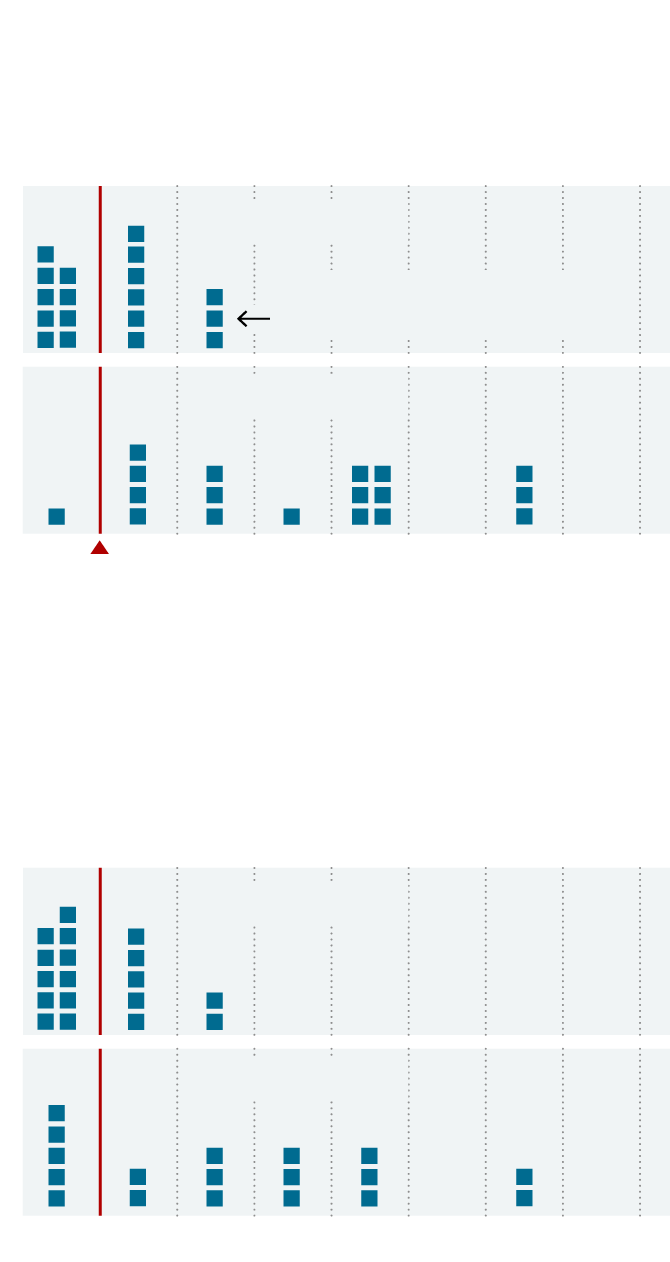 currently think rates should be in the next two years.

What F.O.M.C. participants in June thought

rates should be in the next two years. 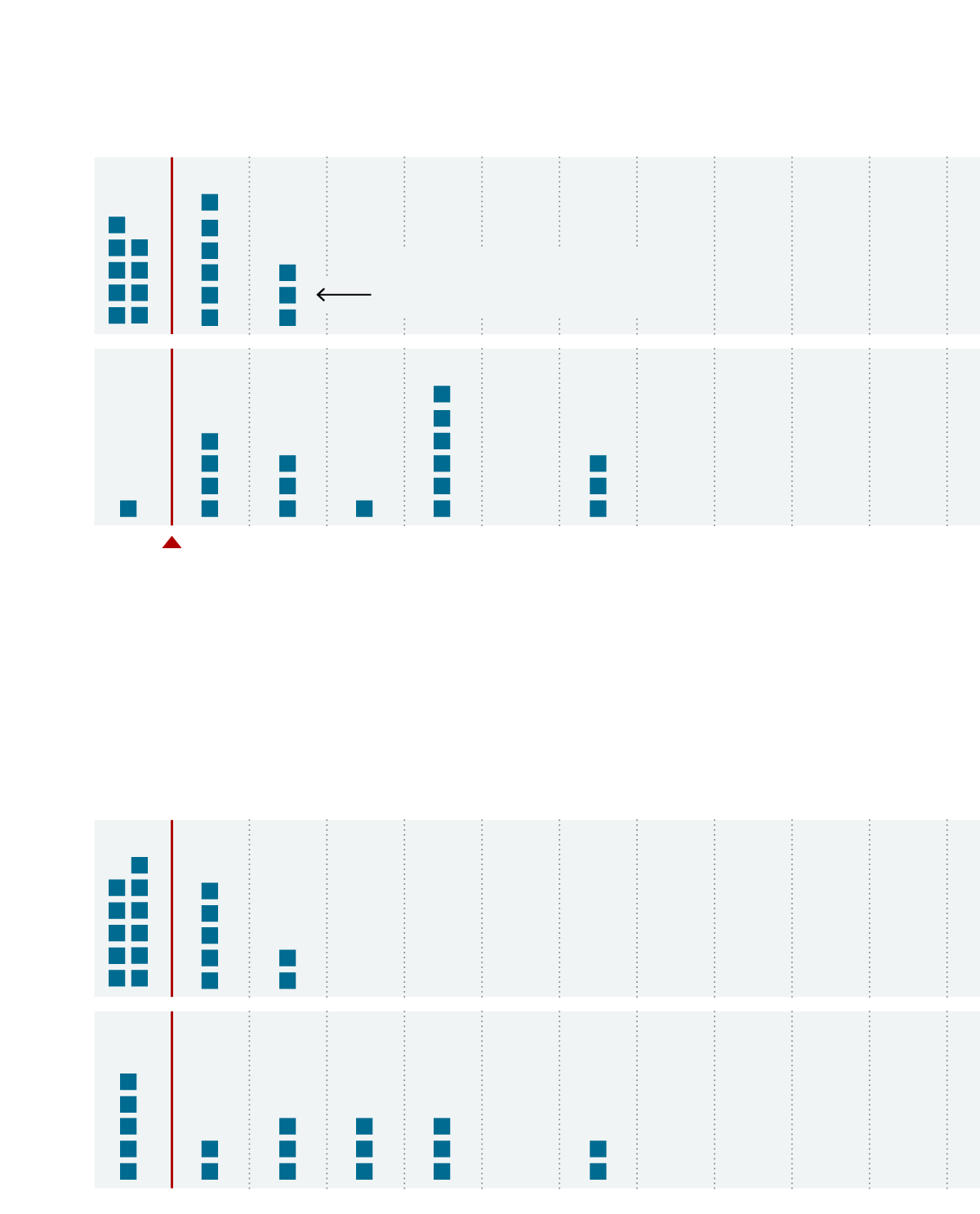 rates should be in the next two years.

Each square represents one

What F.O.M.C. participants in June thought rates should be in the next two years.

Half of the policymakers expected one or more interest rate increases by late 2022, with nine penciling in a rate hike next year, up from seven when projections were last released in June. This was the first time the Fed has released 2024 projections, and officials expected rates to stand at 1.8 percent at the end of that year.

Inflation has moved sharply higher in recent months, elevated by supply-chain disruptions and other quirks tied to the pandemic. The Fed’s preferred metric, the personal consumption expenditures index, climbed 4.2 percent in July from a year earlier.

But there are questions about how inflation will shape up in the coming months and years. Some officials worry that it will remain elevated, fueled by strong consumption and newfound corporate pricing power as consumers come to expect and accept higher costs.

Others fret that the same one-offs pushing prices higher today will lead to uncomfortably low inflation down the road — used car prices have caused a big chunk of the 2021 increase and could fall, for instance. Tepid price increases prevailed before the pandemic started, and the same global trends that had been weighing inflation down could once again dominate.

Inflation that is either too high or too low would be a problem for the Fed, which aims for 2 percent annual price gains on average over time.

Congress has given the central bank two tasks: It is supposed to foster both price stability and maximum employment.

That second goal also remains elusive. Millions of jobs remain missing compared to before the pandemic, even after months of historically rapid employment gains. Officials want to avoid lifting interest rates to cool off the economy before the labor market has fully healed. It’s difficult to know when that might be, because the economy has never recovered from pandemic-induced lockdowns before.

But the central bank has been cautious in announcing its plans for the so-called “taper.” In 2013, when a former Fed chair suggested that a post-financial-crisis bond purchase program would slow, it roiled global markets in what became known as the “taper tantrum.”

Before Wednesday’s announcement, most economists expected the Fed to formally announce a taper plan at its next meeting, which is scheduled for Nov. 2-3.

The Return of the Shadowman

Unmasked Police Officers Remove a Subway Rider After He Confronts Them