The panel recommended against blanket access to Pfizer boosters, but urged offering them to those 65 and older and “at high risk.” Here’s the latest on Covid-19.,

Britain announced it would relax and simplify rules on international travel in and out of England starting on Oct. 4, citing the success of its vaccination rollout.

Today, we’re announcing a new, simpler, easier system, which will decrease the burden on people traveling and stay in place at least till the new year. It means you won’t have to take a pre-departure test. The Day 2 P.C.R. test will be scrapped in favor of a lateral flow, and all of this is only available because so many people have been vaccinated. Nine out of 10 adults in this country are there, and its enabled us to scrap the traffic light system and make travel easier for people once again while still maintaining that protection for everybody’s health. If you’ve not been vaccinated and I don’t mean for a medical reason, but just because you choose not to be vaccinated, then, of course, you would have to carry on taking the additional test, which does involve the extra money. Most people will say nine out of 10 adults have been vaccinated in this country, so this simply doesn’t apply to most people. And actually, the other thing I’m announcing today is there’s going to be over 50 countries where we’re going to recognize their vaccine programs in addition to the E.U. and the United States. So, many other countries now will come into that regime where people can come here and they won’t need to take P.C.R. tests and self-isolate. 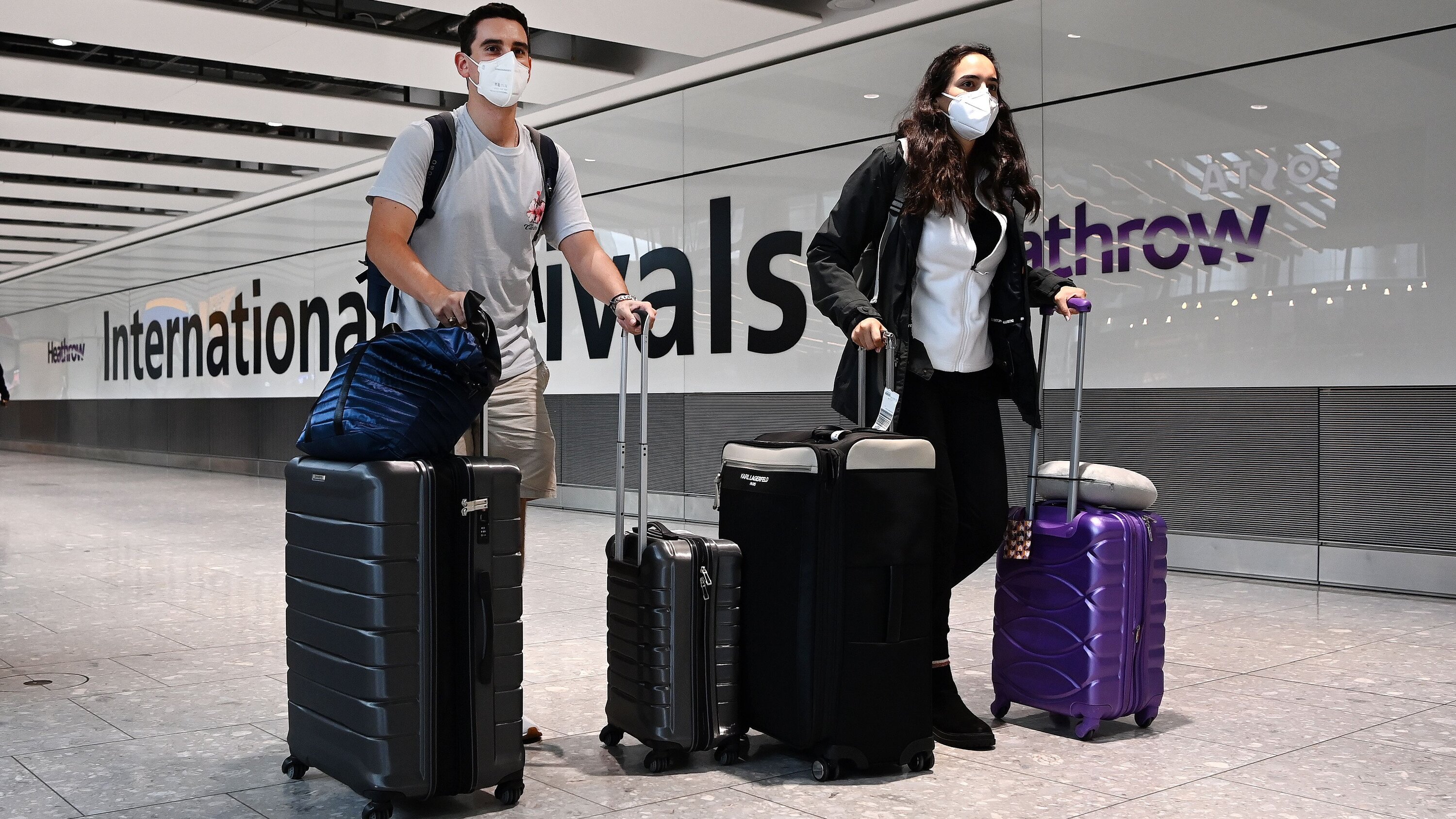 Britain announced it would relax and simplify rules on international travel in and out of England starting on Oct. 4, citing the success of its vaccination rollout.CreditCredit…Andy Rain/EPA, via Shutterstock

Citing the success of Britain’s vaccine rollout, government authorities announced on Friday that coronavirus restrictions on international travel in and out of England would be eased beginning at 4 a.m. local time on Oct. 4.

The current three-tier, traffic-light-inspired system, which was introduced in May, caused confusion among Britons and the travel industry. The system going into place next month replaces that with a single “red” list of countries and territories that present the highest coronavirus risk, and simplified travel measures for arrivals from the rest of the world.

The changes were announced in a statement from Britain’s departments of Transport and Health and Social Care; the health secretary, Sajid Javid; and the transportation secretary, Grant Shapps. Mr. Shapps said it represented a simpler, more straightforward system, “one with less testing and lower costs, allowing more people to travel, see loved ones or conduct business around the world while providing a boost for the travel industry.”

The statement announced other changes as well: Starting on the same day, fully vaccinated passengers will no longer be required to take a coronavirus test before arriving in England from a country that is not on the red list, and that the test they must take on the second day after their return can be a rapid test, which is less expensive than the more accurate PCR test.

However, anyone testing positive will be required to isolate and receive negative results from a PCR test, which will be free to the traveler. The samples will be “genomically sequenced to help identify new variants,” the government’s statement said.

A negative test ahead of arrival will still be required for unvaccinated passengers, and they will also still be required to have PCR tests two and eight days later. Unvaccinated people arriving in England from red list countries will have to quarantine in a government-approved hotel for a mandatory 10 nights at their own cost.

And next week, eight countries will be removed from England’s red list: Turkey, Pakistan, the Maldives, Egypt, Sri Lanka, Oman, Bangladesh and Kenya.

Sixty-six percent of the population of the United Kingdom is fully vaccinated, and an additional 6 percent have received a first dose. But average daily deaths have risen 24 percent over the last two weeks.

And the pandemic is playing out differently across the four U.K. nations — England, Scotland, Wales and Northern Ireland — which operate independently on pandemic travel restrictions, as in many other areas of governance.

On Friday, the BBC reported that the government of Wales, where average daily cases are up 19 percent over the last two weeks, said it would follow England’s lead in adjusting its red list, and that it would “carefully consider” the proposed changes on testing.

Scotland, where average daily cases have fallen by 30 percent over the last two weeks, said that it was also easing travel restrictions, but would maintain the requirements for Day 2 and Day 8 PCR tests for vaccinated arrivals to minimize “the risk of importing variants of concern.”

The government of Northern Ireland website did not offer new guidance on its travel restrictions; cases are flat there. England’s cases are dropping off from a recent spike.

So far, 73 percent of people in Britain have received a single dose of a coronavirus vaccine, while 66 percent have received two doses, according to data collated by The New York Times.

The Return of the Shadowman

Unmasked Police Officers Remove a Subway Rider After He Confronts Them