Years later, the Internal Revenue Service got wind of the arrangement, which it condemned as an “abusive” tax shelter. The move by Bristol Myers, the I.R.S. concluded, would cheat the United States out of about $1.4 billion in taxes.

That is a lot of money, even for a large company like Bristol Myers. But the dispute remained secret. The company, which denies wrongdoing, didn’t tell its investors that the U.S. government was claiming more than $1 billion in unpaid taxes. The I.R.S. didn’t make any public filings about it.

And then, ever so briefly last spring, the dispute became public. It was an accident, and almost no one noticed. The episode provided a fleeting glimpse into something that is common but rarely seen up close and that the Biden administration hopes to discourage: multinational companies, with the help of elite law and accounting firms and with only belated scrutiny from the I.R.S., dodging billions of dollars in taxes.

Then, in an instant, all traces of the fight — and of Bristol Myers’s allegedly abusive arrangement — vanished from public view.

Like most big pharmaceutical companies, Bristol Myers, which is based in New York, reduces its U.S. taxes by holding patent rights to its most lucrative drugs in subsidiaries in countries with low tax rates. The result is that the company’s profits move from high-tax places like the United States to places like Ireland, which has a low corporate tax rate and makes it easy for companies to attribute profits to locales with no income taxes at all.

The $2 trillion infrastructure plan that the White House unveiled on Wednesday proposed increasing the minimum overseas tax on multinational corporations, which would reduce the appeal of such arrangements.

For the three years leading up to 2012, Bristol Myers’s tax rate was about 24 percent. The U.S. corporate income tax rate at the time was 35 percent. (It is now 21 percent.)

The company wanted to pay even less.

In 2012, it turned to PwC, the accounting, consulting and advisory firm, and a major law firm, White & Case, for help getting an elaborate tax-avoidance strategy off the ground. PwC had previously been Bristol Myers’s auditor, but it was dismissed in 2006 after an accounting scandal forced Bristol Myers to pay $150 million to the U.S. government. Now PwC, with a long history of setting up Irish tax shelters for multinational companies, returned to Bristol Myers’s good graces.

The plan hinged on a tax write-off known as amortization. It lets companies deduct from their taxable income a portion of the cost of things, like the value of a patent, over a period of years. (For physical assets like office buildings, the process is known as depreciation.)

In the United States, Bristol Myers held rights to patents on several drugs that it had already fully written off for tax purposes.

In Ireland, a Bristol Myers subsidiary held rights to patents that it had not yet fully written off.

That mismatch provided a lucrative opportunity. The company moved the patent rights from the U.S. and Irish subsidiaries into a new company. As the U.S. patents generated income, the Irish amortization deductions now helped offset U.S. taxes.

When a company deploys a complicated new arrangement like this, it will generally seek the imprimatur of law and accounting firms. If they vouch for the maneuver’s legitimacy, that can protect the company from accusations that it deliberately broke the law.

In fall 2012, after the new structure was set up, Bristol Myers asked PwC and White & Case to review the arrangement. Both firms provided the company with lengthy letters — each more than 100 pages — essentially signing off from a legal standpoint.

“Bristol Myers Squibb is in compliance with all applicable tax rules and regulations,” said Megan Morin, a company spokeswoman. “We work with leading experts in this area and will continue to work cooperatively with the I.R.S. to resolve this matter.”

A spokeswoman for PwC declined to comment. White & Case lawyers and a spokeswoman did not respond to a list of questions.

But there were ample signs that the I.R.S. would probably take a dim view of the arrangement. A few months earlier, a federal appeals court had sided with the agency after it challenged a similar maneuver by General Electric using an offshore subsidiary called Castle Harbour. The I.R.S. also contested comparable setups by Merck and Dow Chemical.

The Bristol Myers arrangement “appears to be essentially a copycat shelter,” said Karen Burke, a tax law professor at the University of Florida. Since the I.R.S. was already fighting similar high-profile transactions, she said, “Bristol Myers’s behavior seems particularly aggressive and risky.”

The next January, the company announced its 2012 results. Its tax rate had plunged from nearly 25 percent in 2011 to negative 7 percent.

On a call with investors, executives fielded repeated questions about the drop in its tax rate. “Presumably, all drug companies try to optimize their legal entities to take their tax rate as low as they can, yet your rate is markedly lower than any of the other companies,” said Tim Anderson, an analyst at Sanford C. Bernstein & Company. “So I’m wondering why your tax rate might be unique in that regard?”

The more than $1 billion in tax savings came at an opportune moment: Bristol Myers was in the midst of repurchasing $6 billion worth of its own shares, an effort to lift its stock price. By January 2013, it had spent $4.2 billion. The cash freed up by the tax maneuver was enough to cover most of the remainder.

It is not clear when I.R.S. agents first learned about the arrangement. But by last spring, the I.R.S. chief counsel’s office had determined that it violated a provision of the tax law that targets abusive profit-shifting arrangements.

In a 20-page legal analysis, the I.R.S. calculated that the offshore setup was likely to save Bristol Myers up to $1.38 billion in federal taxes.

After a complex audit, the I.R.S. often circulates its analyses to agents nationwide in case they encounter similar situations. A redacted version of the report is also made public on the I.R.S. website, cleansed of basic information like the name of the company.

But when the I.R.S. posted its Bristol Myers report last April, it was not properly redacted. With tools available on most laptops, the redacted portions could be made visible.

The I.R.S. quickly removed the improperly redacted version from its website. But Tax Notes, a widely read trade publication, had also posted the document. When the I.R.S. provided a clean version, Tax Notes took down the original.

Cara Griffith, the chief executive of Tax Analysts, the publisher of Tax Notes, said the publication erred “on the side of not publishing confidential taxpayer information that was accidentally released through an error in redaction, unless it reaches a very high threshold of newsworthiness.”

In the intervening hours, though, some tax practitioners had downloaded the original version from Tax Notes. One of them shared it with The New York Times, which viewed the document without the redactions. 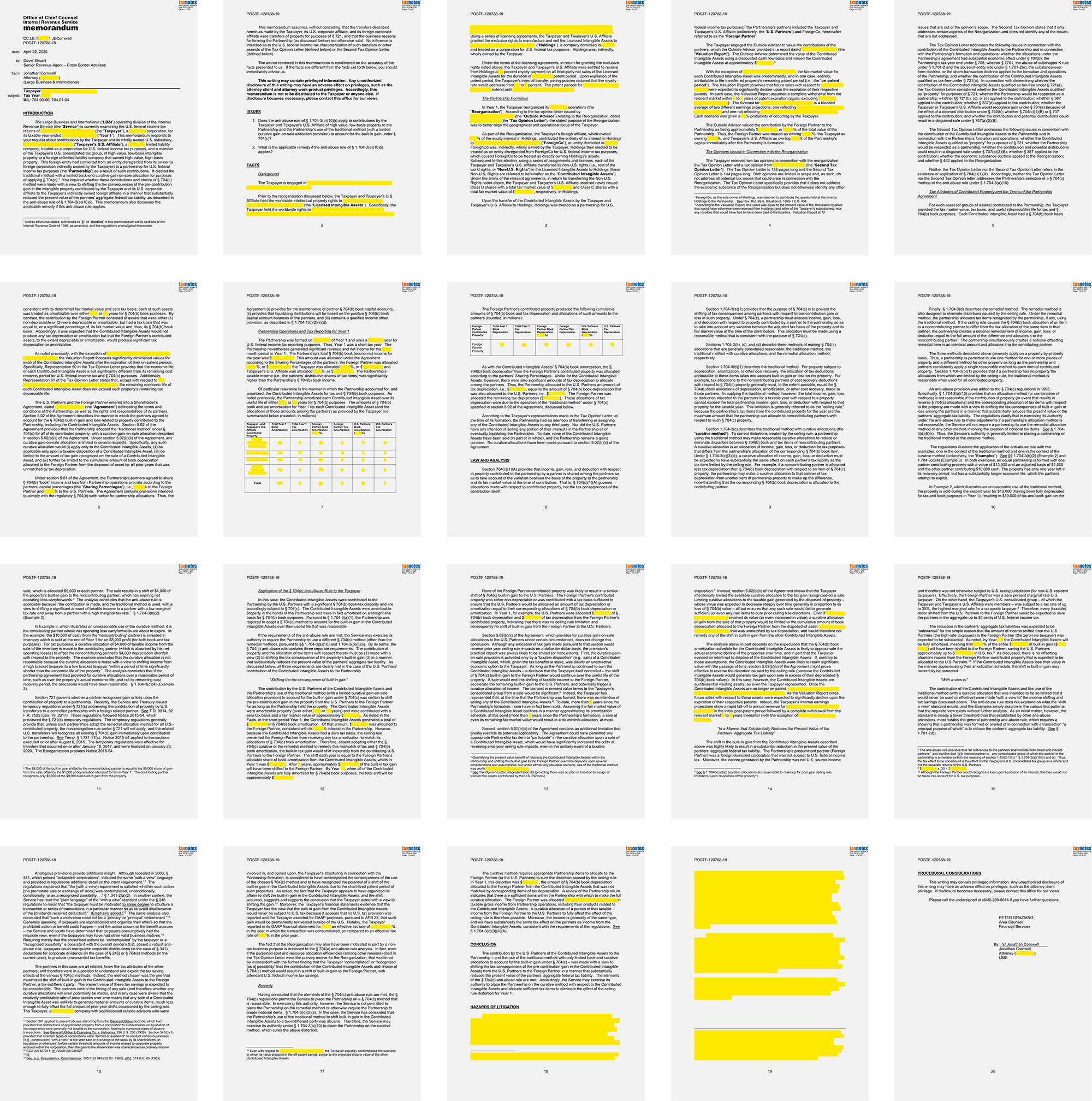 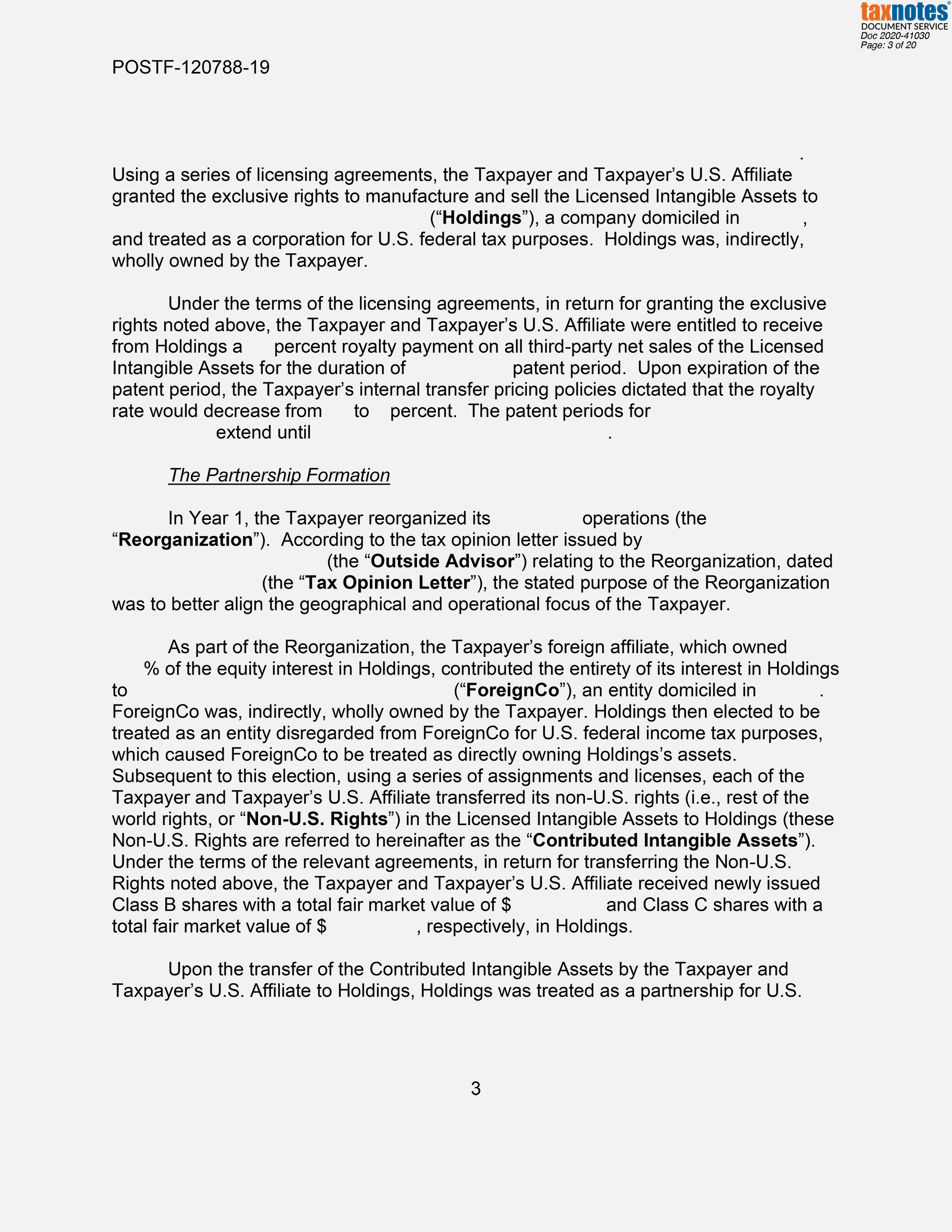 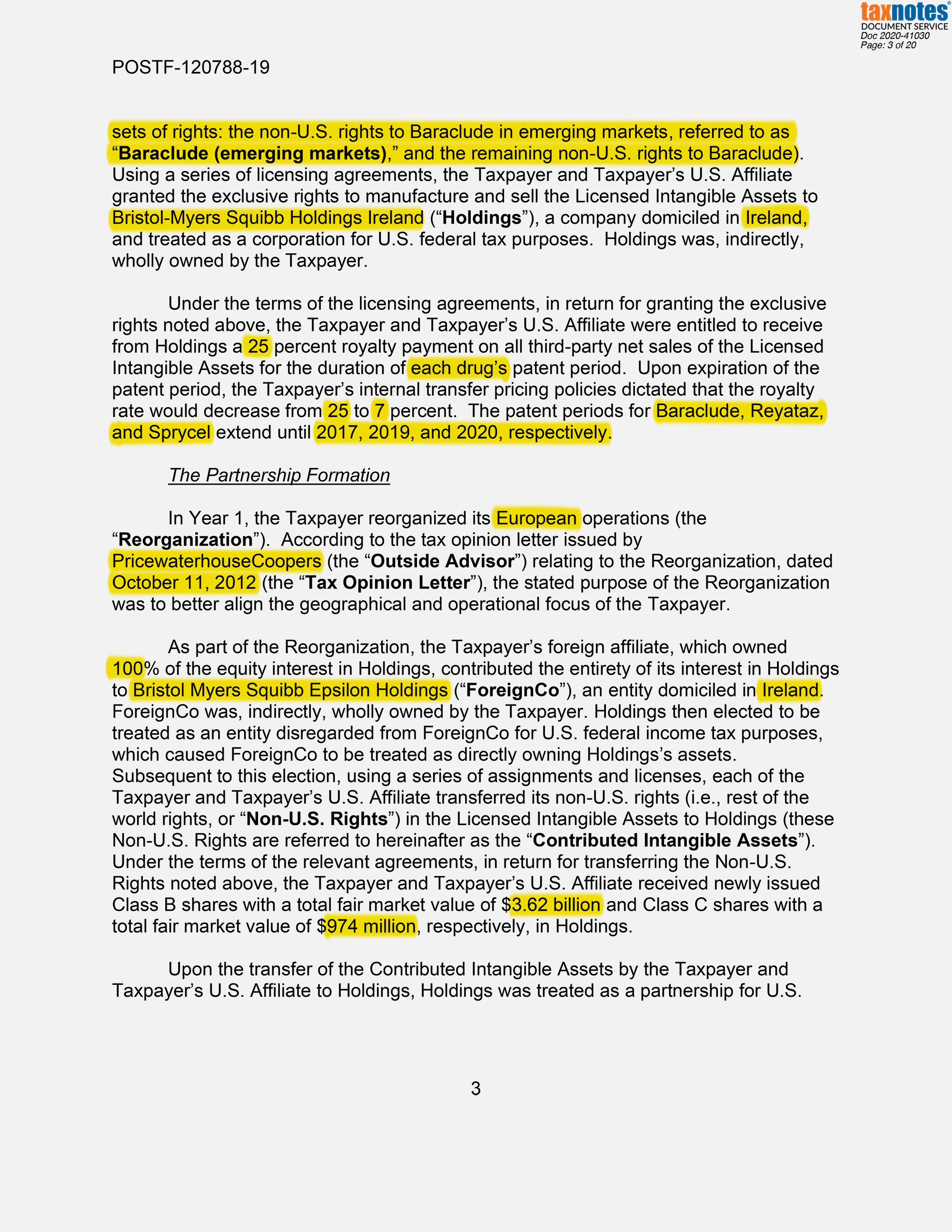 This is what Page 3 of the document looked like when it was released by the I.R.S.

But with little effort, it was easy to see through the redactions, and read all material intended to be hidden from public view.

In addition to detailing the offshore structure, the I.R.S. report revealed the role of PwC and White & Case in reviewing the deal. While both firms assessed the arrangement’s compliance with various provisions of the tax law, neither firm offered an opinion on whether the deal violated the one portion of the tax law — an anti-abuse provision — that the I.R.S. later argued made the transaction invalid.

Tax experts said they doubted the omission was inadvertent. The I.R.S. can impose penalties on companies that knowingly skirt the law. By not addressing the most problematic portion of the law, Bristol Myers’s advisers might have given the company plausible deniability.

Both firms “appear to have carefully framed the issues so that they could write a clean opinion that potentially provided a penalty shield,” Professor Burke said.

David Weisbach, a former Treasury Department official who helped write the regulations governing the tax-code provision that Bristol Myers is accused of violating, agreed. PwC and White & Case “are giving you 138 pages of legalese that doesn’t address the core issue in the transaction,” he said. “But you can show the I.R.S. you got this big fat opinion letter, so it must be fancy and good.”

The current status of the tax dispute is not clear. Similar disputes have spent years winding through the I.R.S.’s appeals process before leading to settlements. Companies often agree to pay a small fraction of what the I.R.S. claims was owed.

“There is a real chance that a matter like this could be settled for as little as 30 percent” of the amount in dispute, said Bryan Skarlatos, a tax lawyer at Kostelanetz & Fink.

In that case, the allegedly abusive tax shelter would have saved Bristol Myers nearly $1 billion.

A Gay Music Teacher Got Married. The Brooklyn Diocese Fired Him.