A Cyclist on the English Landscape

Grounded by the pandemic, a travel photographer spent the year pedaling the roads around his home, resulting in a series of poetic self-portraits.,

Daybreak and a rising mist along the old marsh road, near Normans Bay.Credit…

Photographs and Text by Roff Smith

A year ago, as a travel photographer grounded by the pandemic, I started bringing a camera and tripod with me on my morning bicycle rides, shooting them as though they were magazine assignments.

It started out as just something to do — a challenge to try to see the familiar through fresh eyes. Soon it blossomed into a celebration of traveling at home. 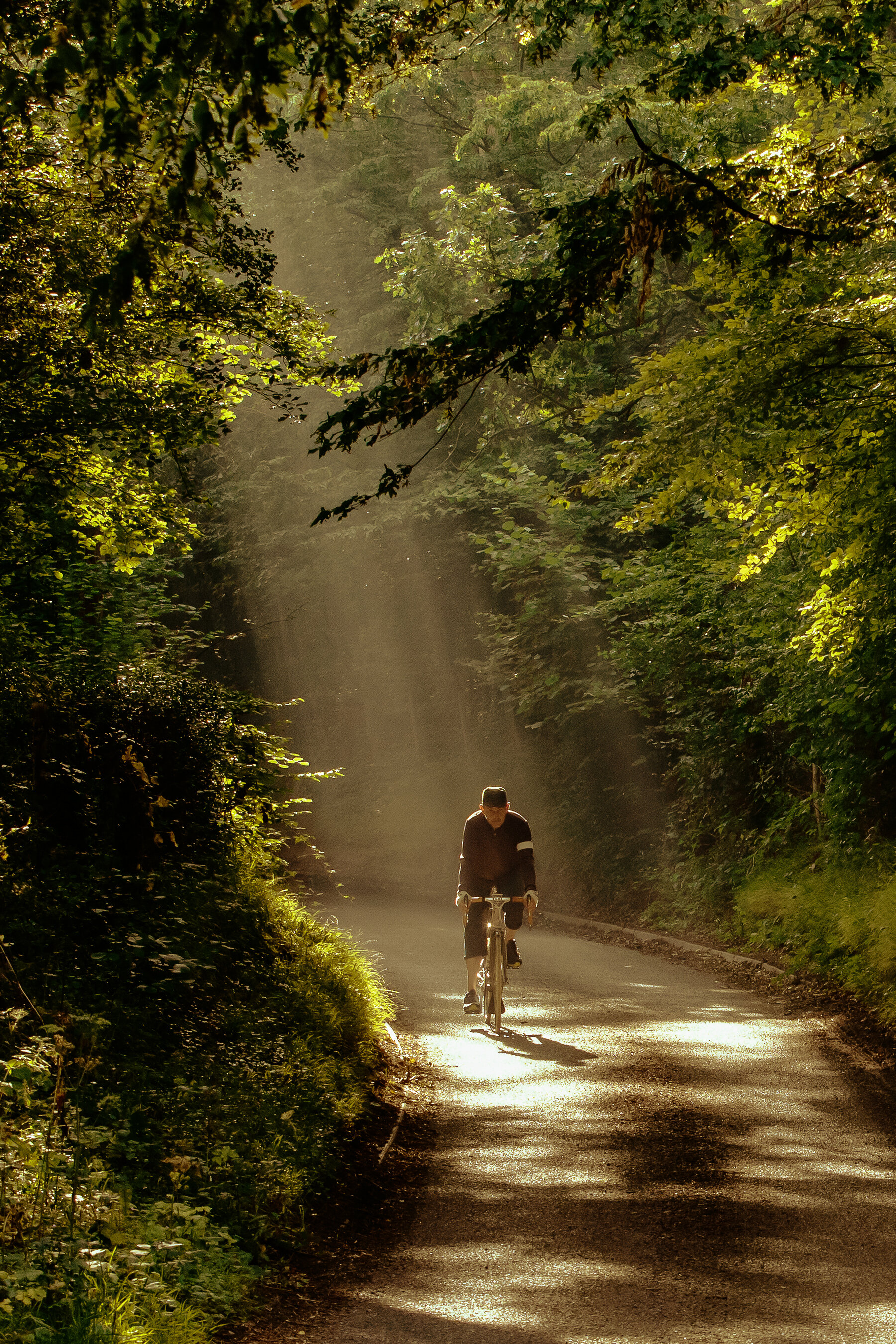 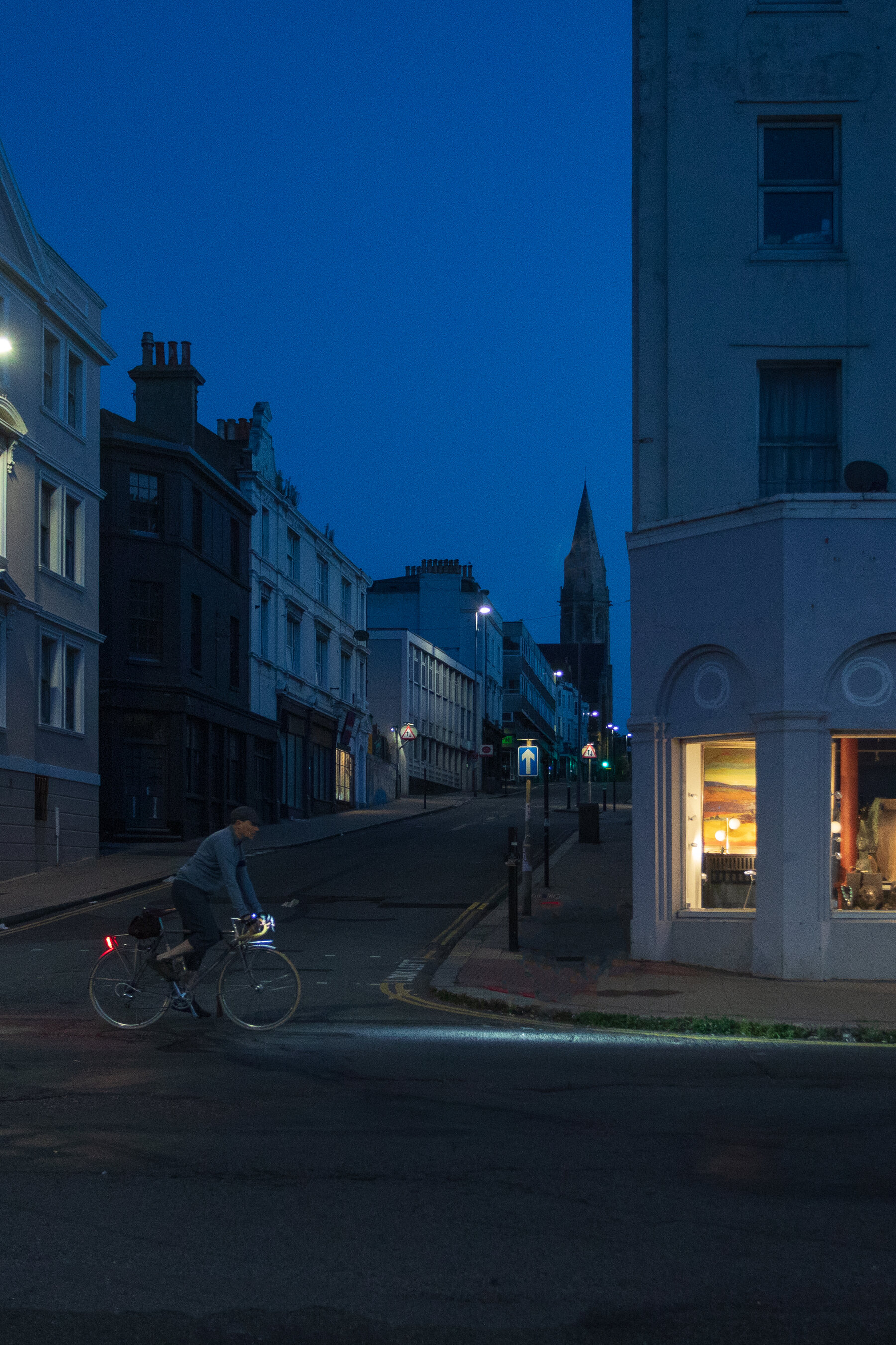 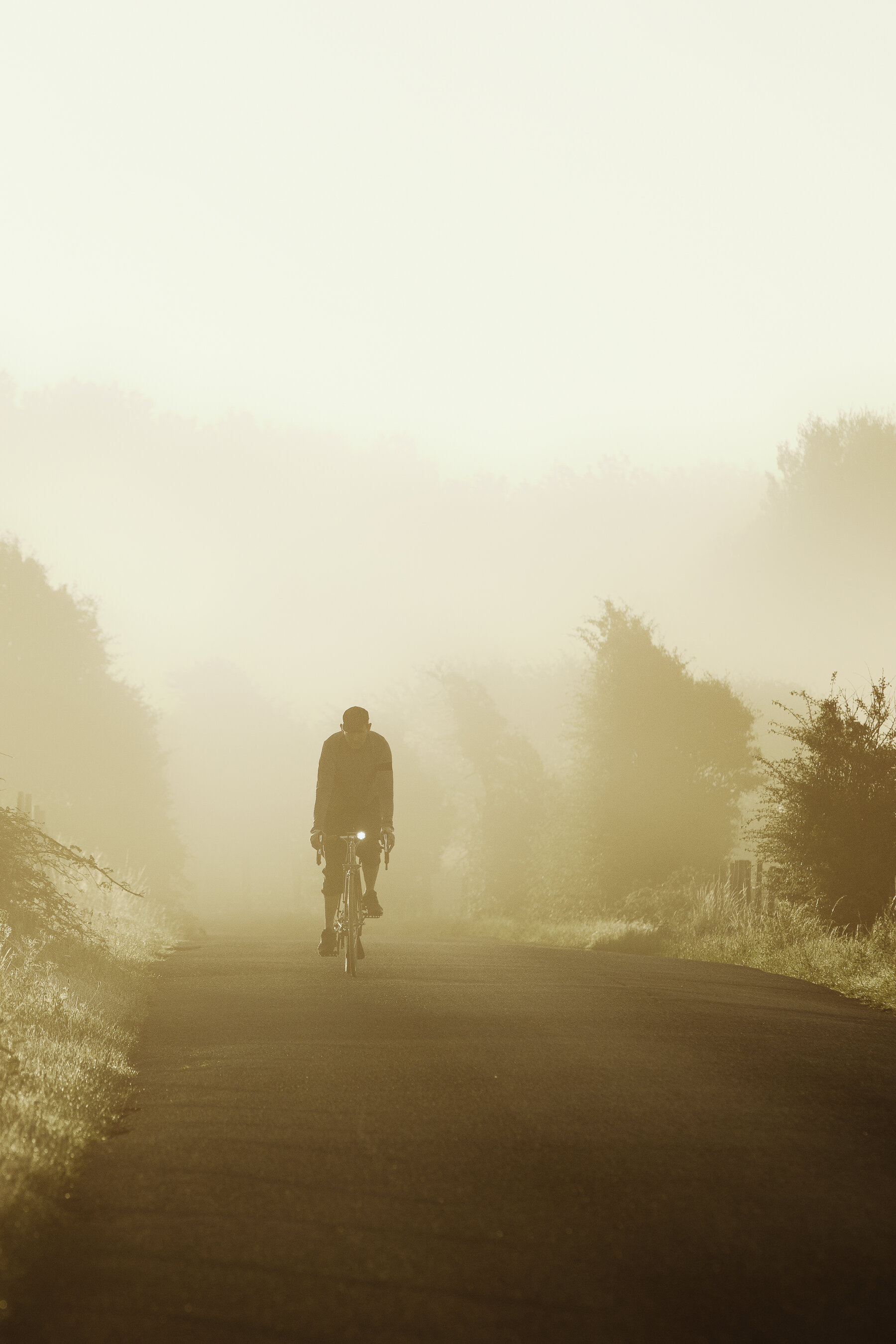 Sunbeams sift through the forest canopy in the ancient wood known as the Weald, not far from the village of Burwash.

As an Edward Hopper fan, I couldn’t resist this curiously evocative night-lit street corner on London Road and Grand Parade, along the seafront at St. Leonards-on-Sea.

Daybreak on Sluice Lane, one of the little lanes on the marsh.

I live in a faded seaside town called St. Leonards-on-Sea, in Sussex, on the south coast of England. If you’ve not heard of it, you’re in good company. It’s not on anybody’s list of celebrated English beauty spots. Indeed, most of my riding is across flat coastal marsh or down-at-the-heel seafront promenades.

There’s history here, of course. This is England after all. The lonely marshes I pedal across most days are where William the Conqueror landed his men in 1066. Otherwise, except for being a haunt for smugglers, this stretch of coast dozed away the centuries until the Victorians brought the railways down from London. 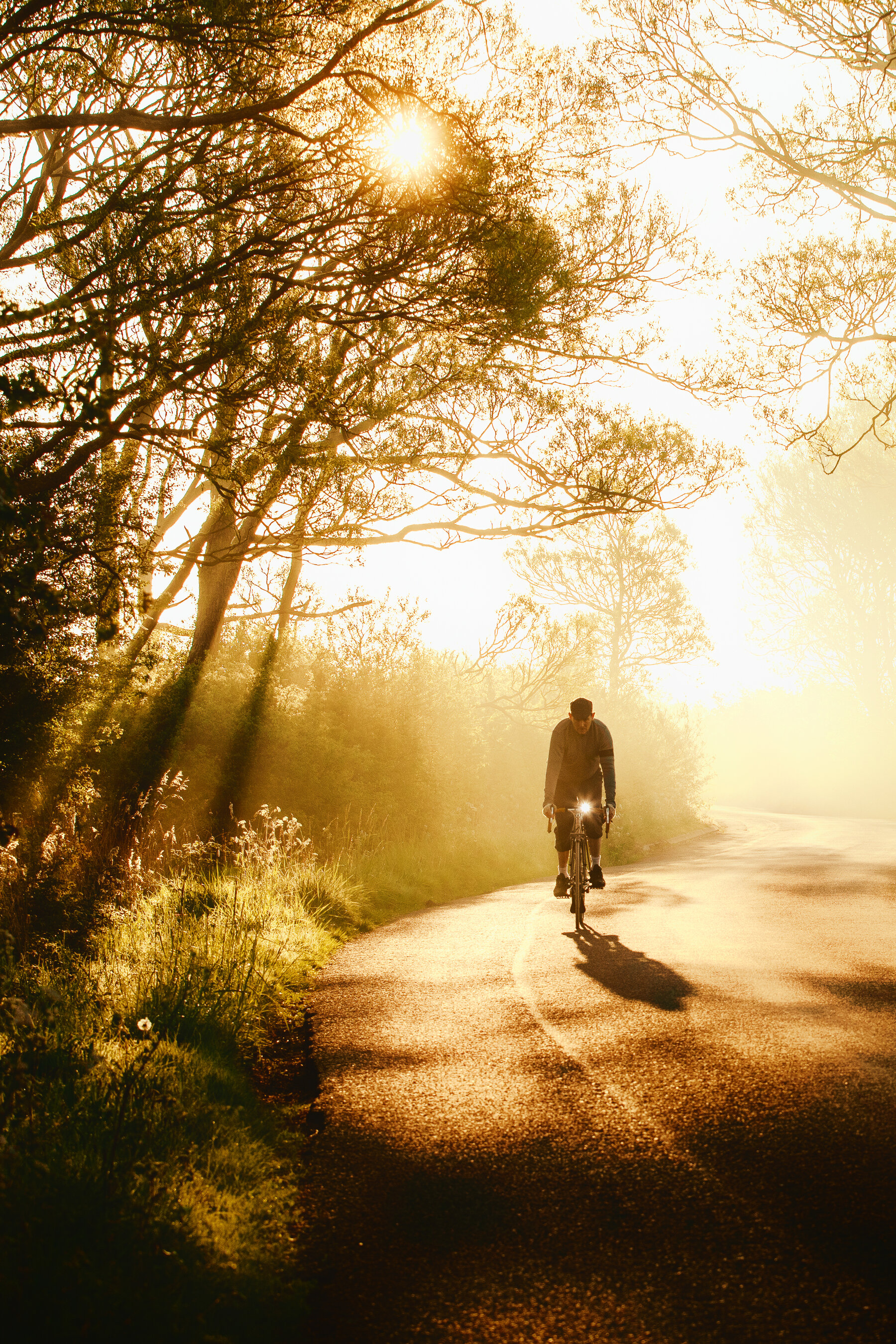 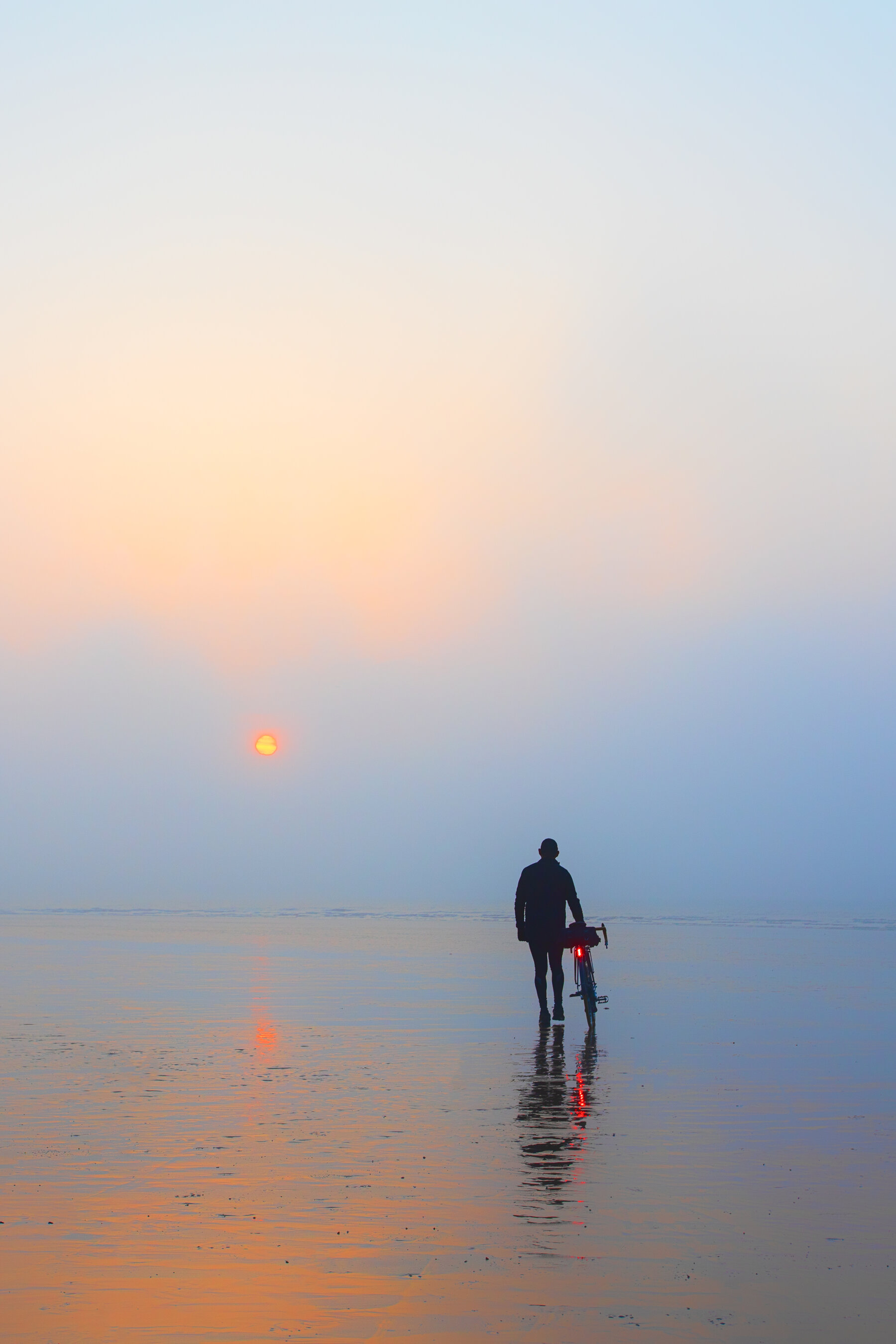 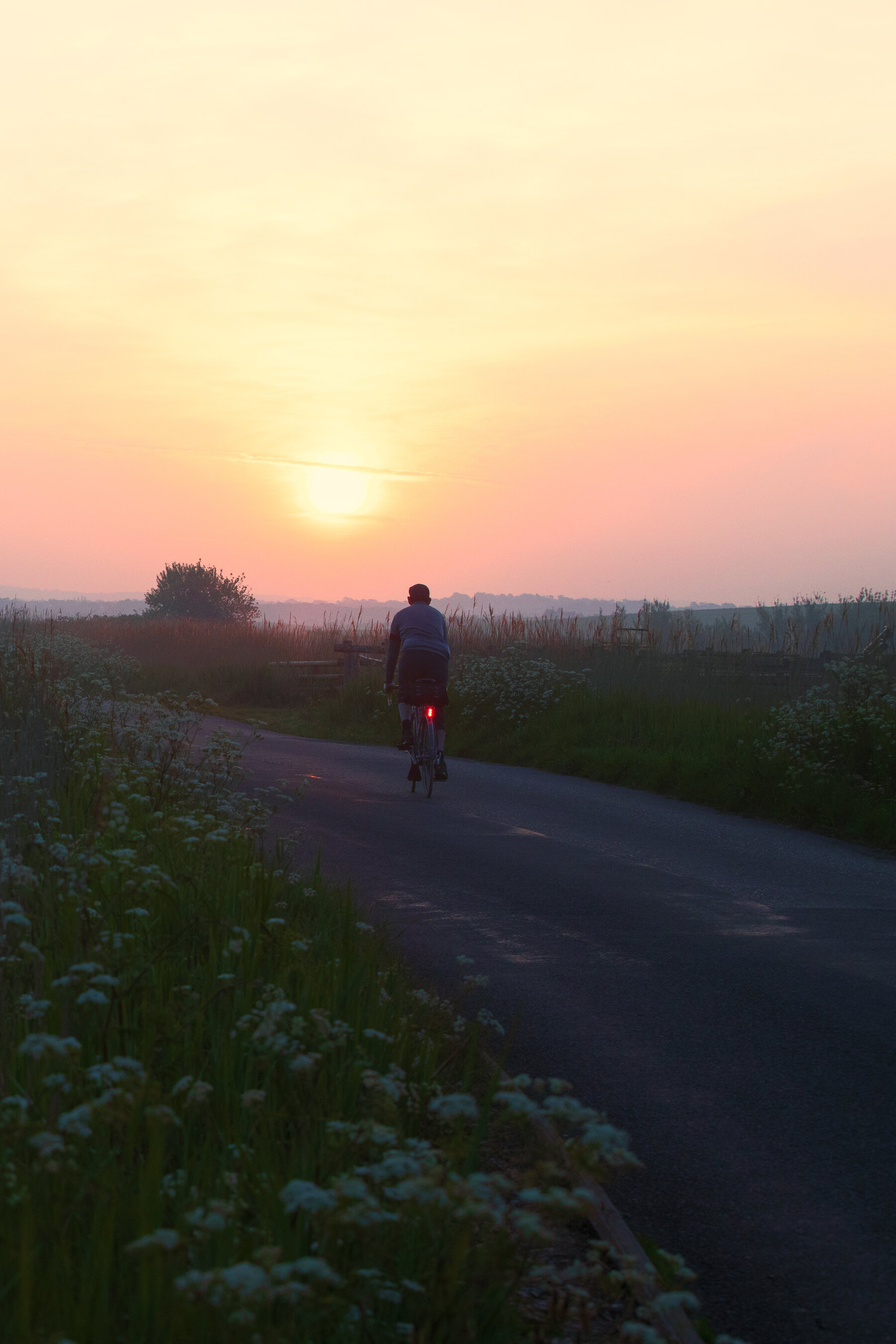 A sunburst over the marsh. Lockdown and the falling off of traffic brought out a notable increase in birds.

Sea mist, a smoldering sunrise and shimmering low-tide sands. This scene, at Hastings, felt straight out of a J. M. W. Turner painting.

A thousand years ago these lonely marshes near Pevensey were where William the Conqueror landed his men in 1066.

Then, for a few gaudy decades, St. Leonards and the other nearby seaside towns became popular bucket-and-spade holiday spots, England’s own Costa del Sol — that is, until budget airfares and the real Costa del Sol, the one in Spain, lured the crowds away and plunged the area into a long and not-so-genteel decline.

As for me, I’m a transplant. I moved here from Australia. After the initial novelty wore off, that of being in England, it assumed a sort of shrugging familiarity — the usual shops, takeaways, a downbeat seafront, rough around the edges but with not-too-inconvenient access to Gatwick and Heathrow and flights to more interesting places.

But a year of exploring St. Leonards and its surrounds, camera in hand, chasing the light, has changed all that. It’s brought home the truth that you don’t need to board a plane and jet off to the far side of the world to experience a sense of travel or the romance of difference. It lies waiting on your doorstep — if you look. 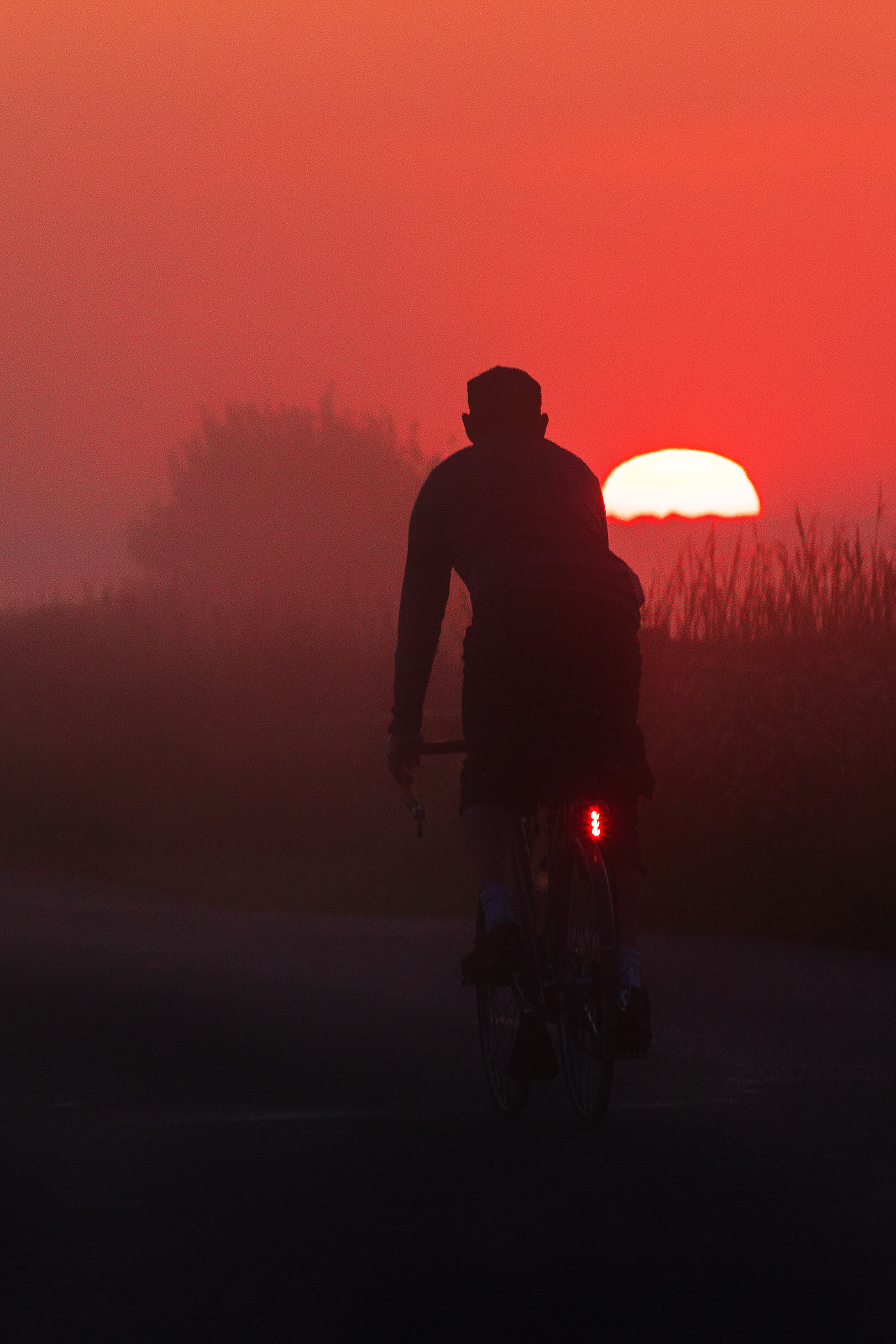 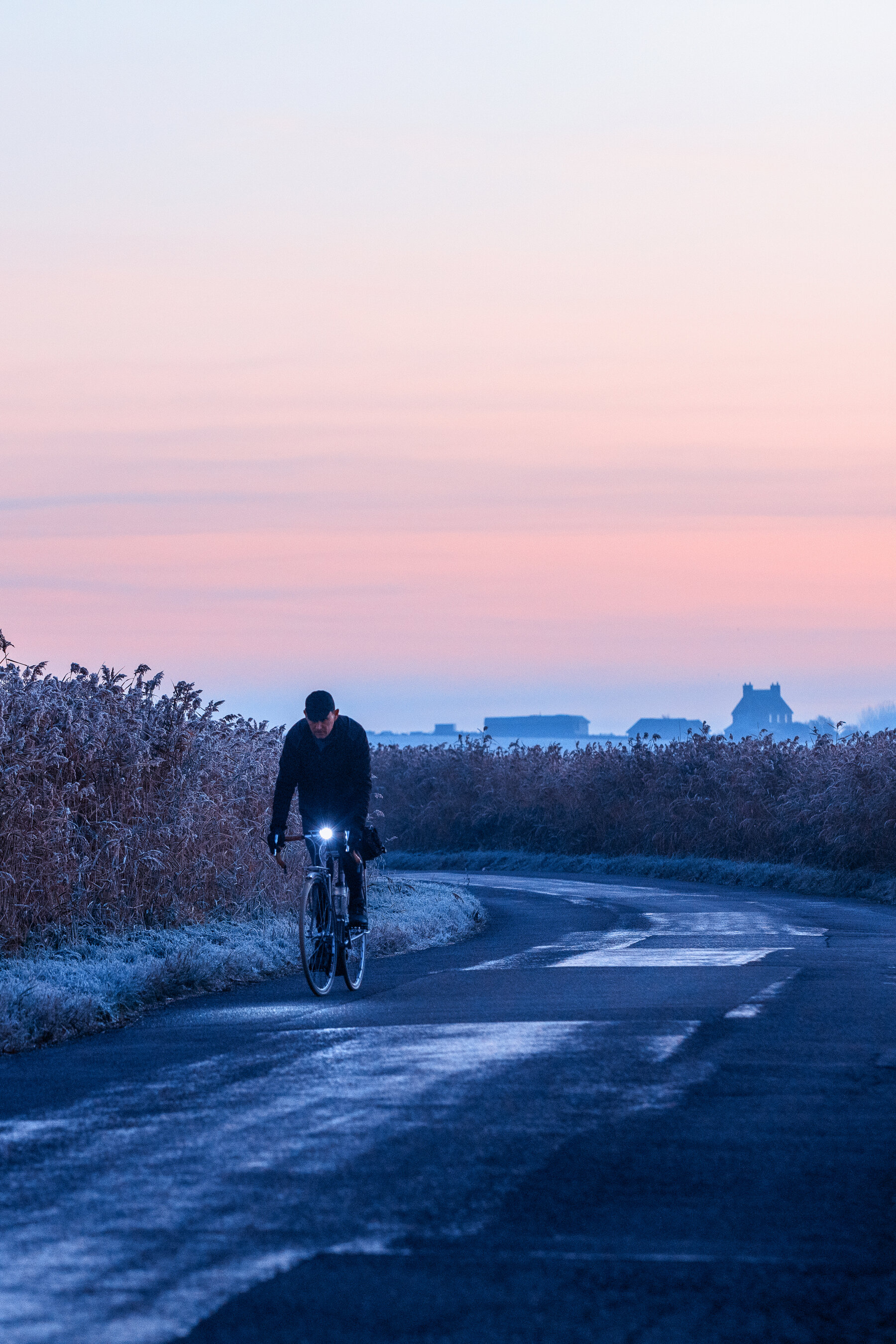 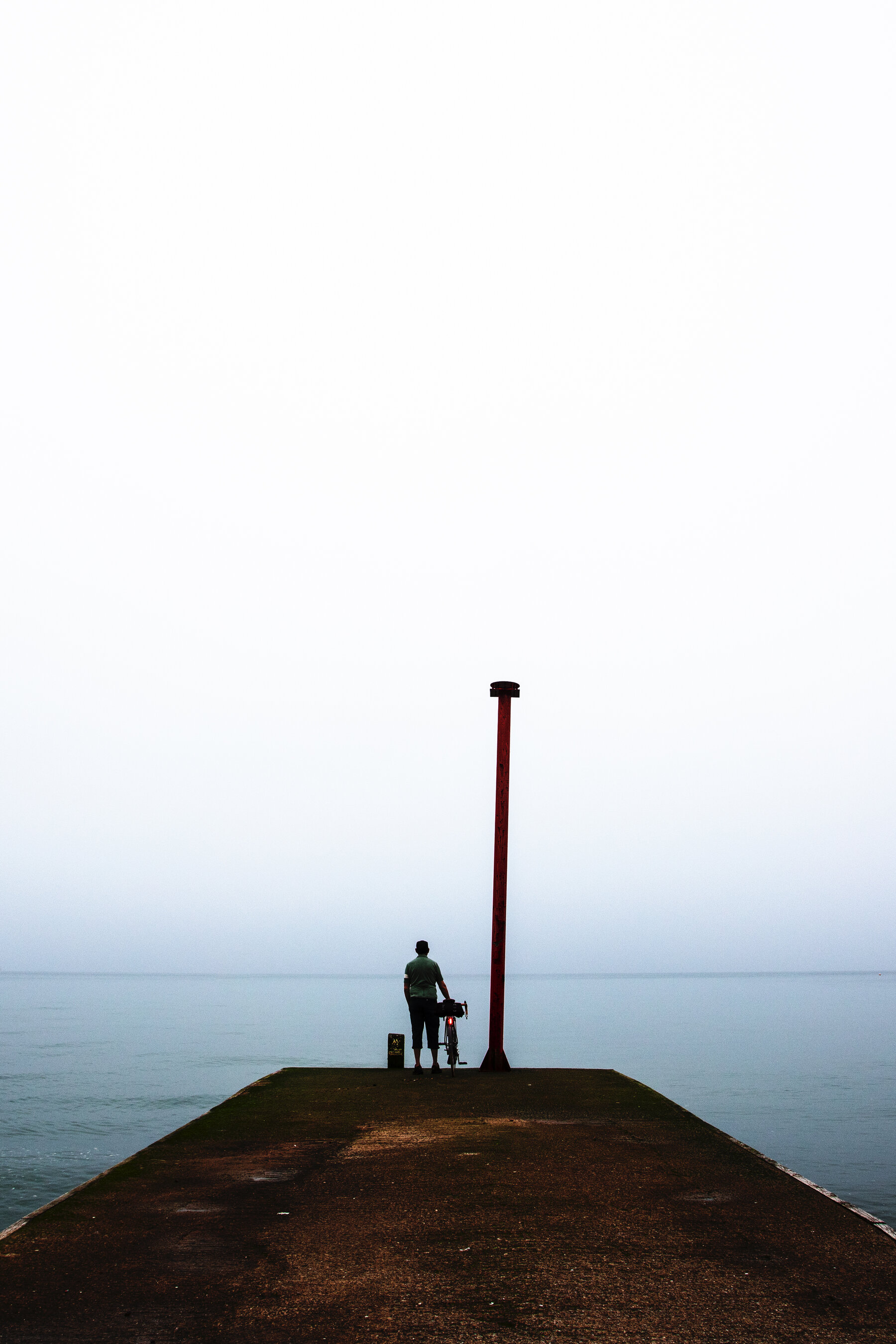 Sussex or the Serengeti? A boiling red sun breaks over the marsh. I’ve come to learn precisely where the sun will break the horizon and to plan my shots accordingly.

Hard frost and a pink dawn along the old marsh road, near Pevensey.

You don’t need to go far. Indeed, I haven’t been able to. With the various lockdowns that have been imposed on us over the past year, it’s been either discouraged or downright illegal to stray far from your residence. All these images were captured within a 10-mile radius of where I live, and most of them much closer than that.

I plan my outings and set out each morning well before dawn in order to be where I want to be in time to catch the first light. In summer that can mean leaving the house as early as 3 a.m. In winter, it’s cold starlight, the crunch of frost under my wheels, occasionally snowflakes swirling in the glow of my headlamp. 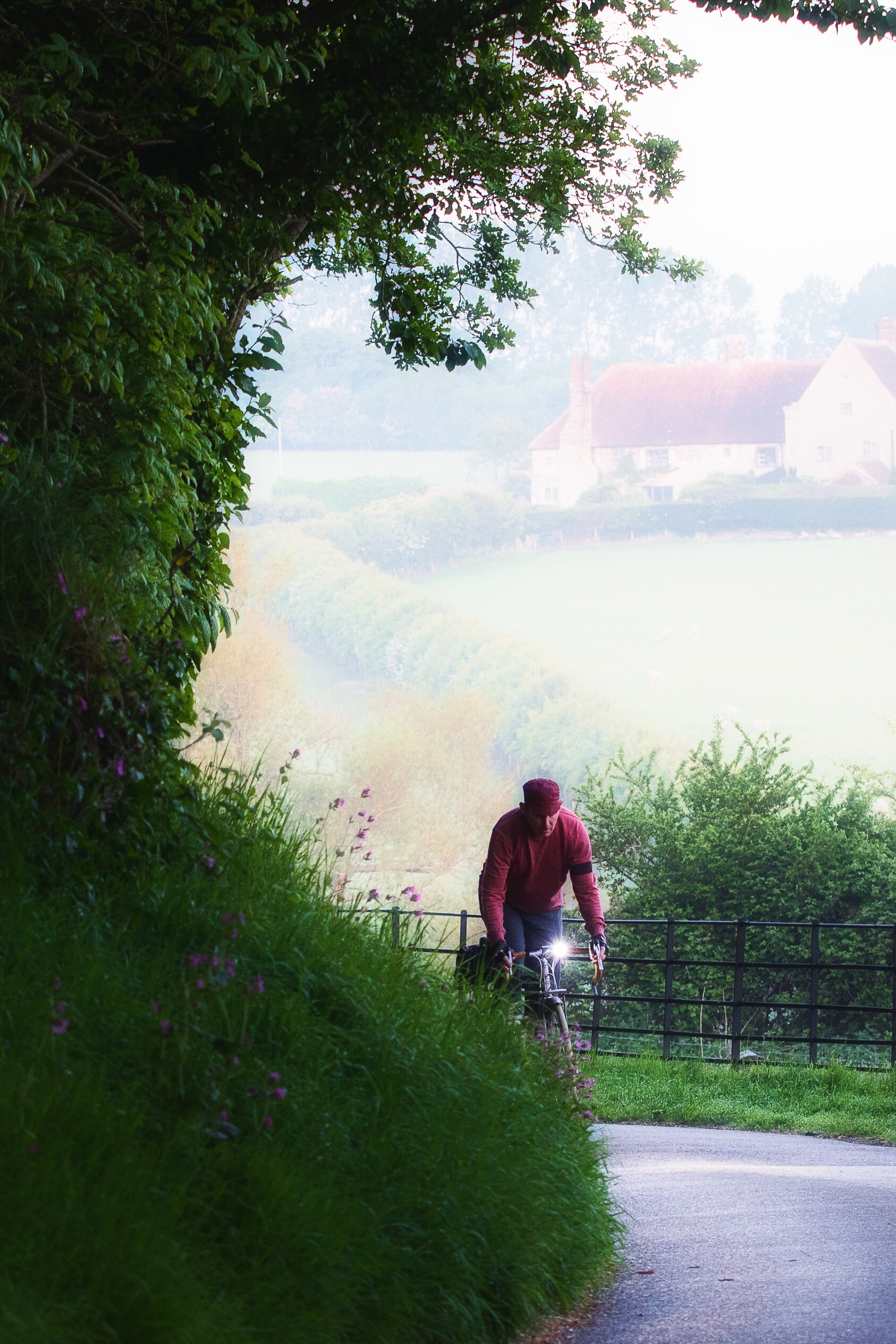 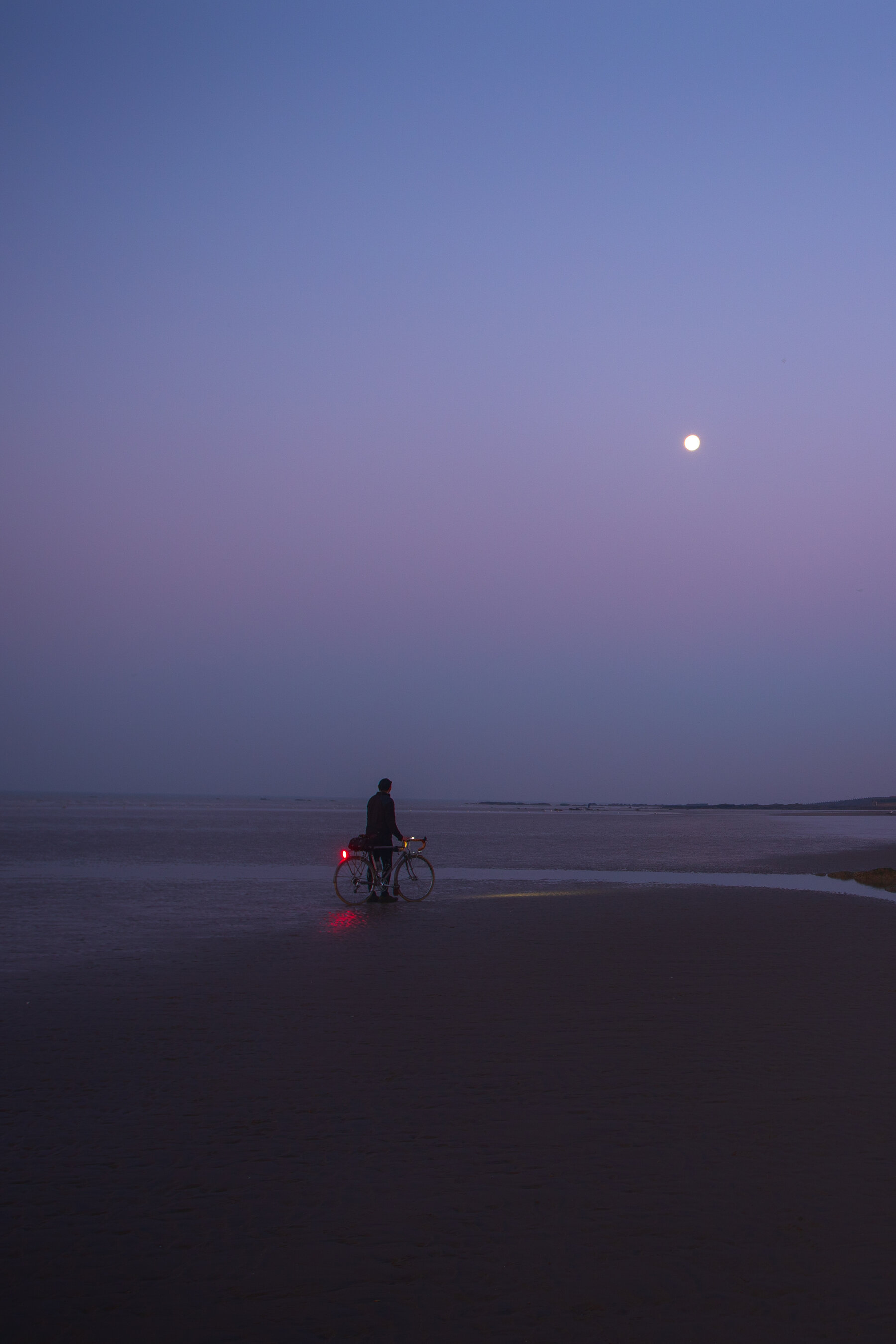 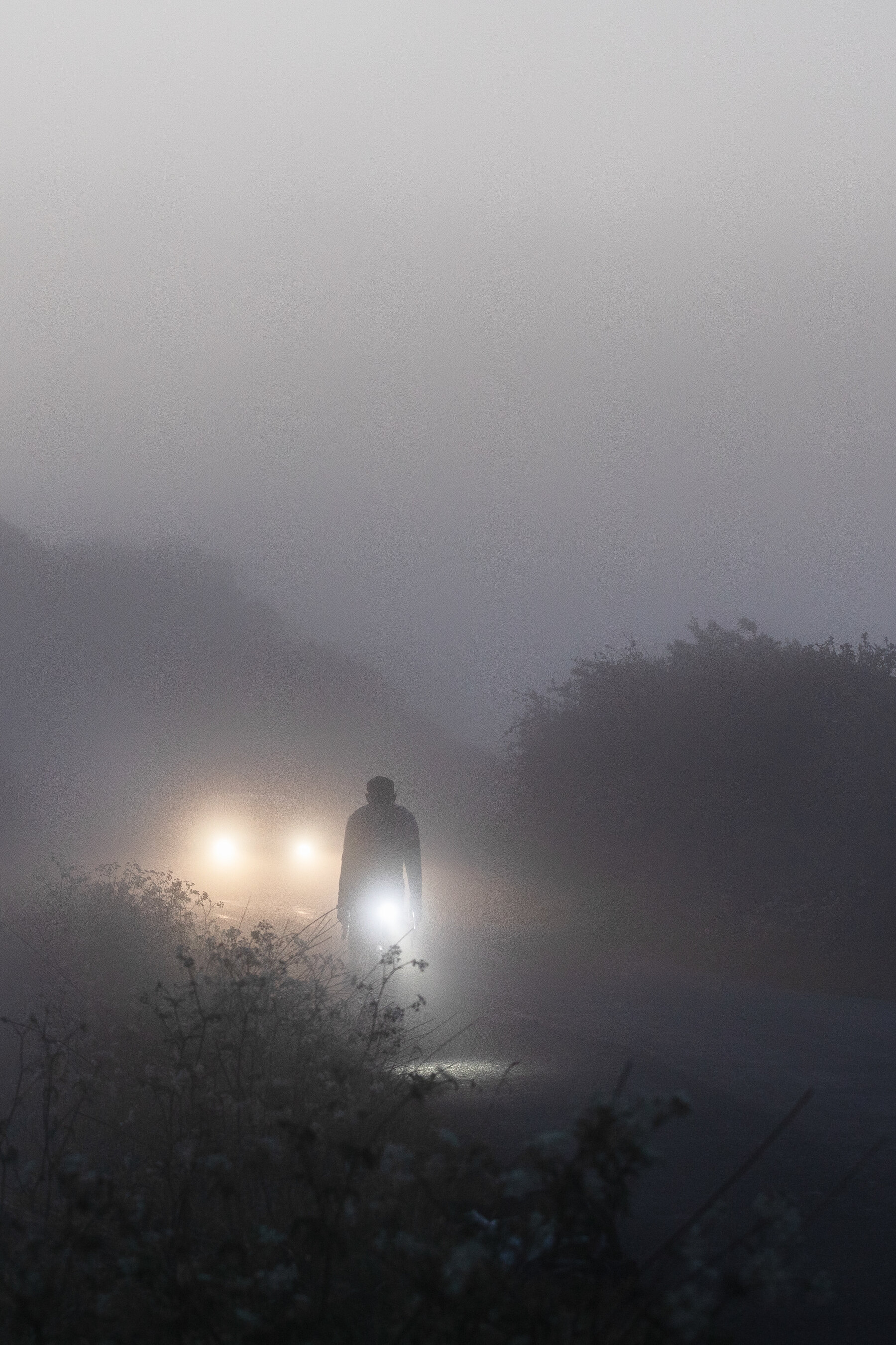 Exploring Wickham Lane, near the town of Winchelsea — as if pedaling into an old oil painting.

St. Leonards-on-Sea by the light of a violet dawn. Who needs a passport? This is three miles from home.

I was shooting in a pea-soup fog in the marsh when I heard the purr of a car engine behind me. At the time I was annoyed by the intrusion, but later, when I got home, I loved the sense of drama and menace in those looming headlamps.

I carry everything I need on my bicycle and work entirely alone. I’m both the photographer and the cyclist in the photos. That part’s taken a bit of getting used to. I’ve never been comfortable in front of the camera. As a journalist, I’ve always said I had a great face for radio and the perfect voice for print. But needs must when the devil drives. What with social-distancing requirements and zero budget, I’m all I’ve got.

These images, though, aren’t meant to be about me. They’re meant to represent a cyclist on the landscape, anybody — you, perhaps.

Creating these images has required not only a new way of visualizing, but a whole new photographic skill set. The first question most people ask is how I trigger the shutter when I’m a hundred yards away on my bicycle. Simple. I use what’s called an intervalometer, a programmable timer that allows me to preset whatever delay I need and then have the camera fire off a chosen number of frames. That’s the easy bit. Anyone can take a self-portrait. 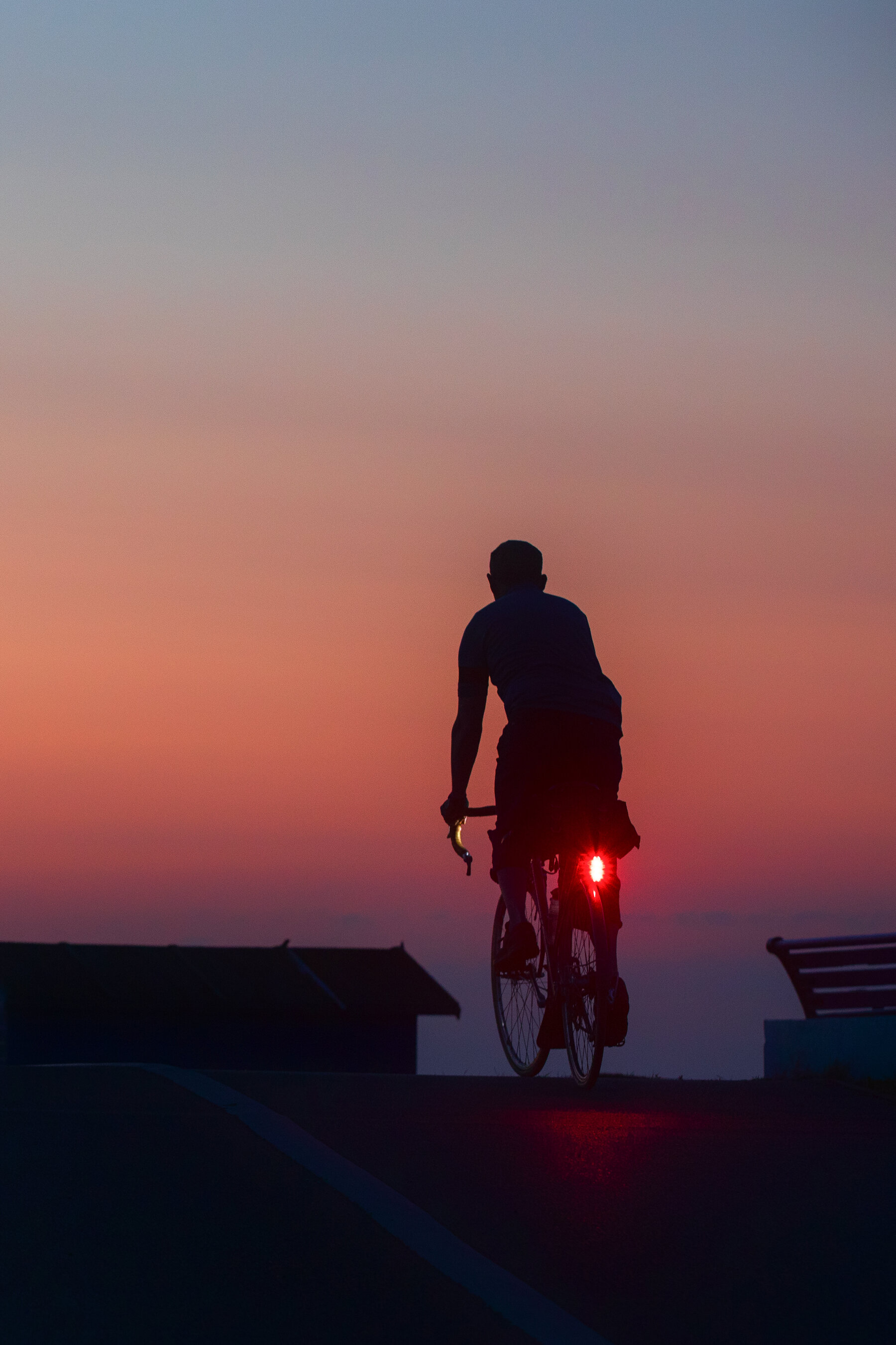 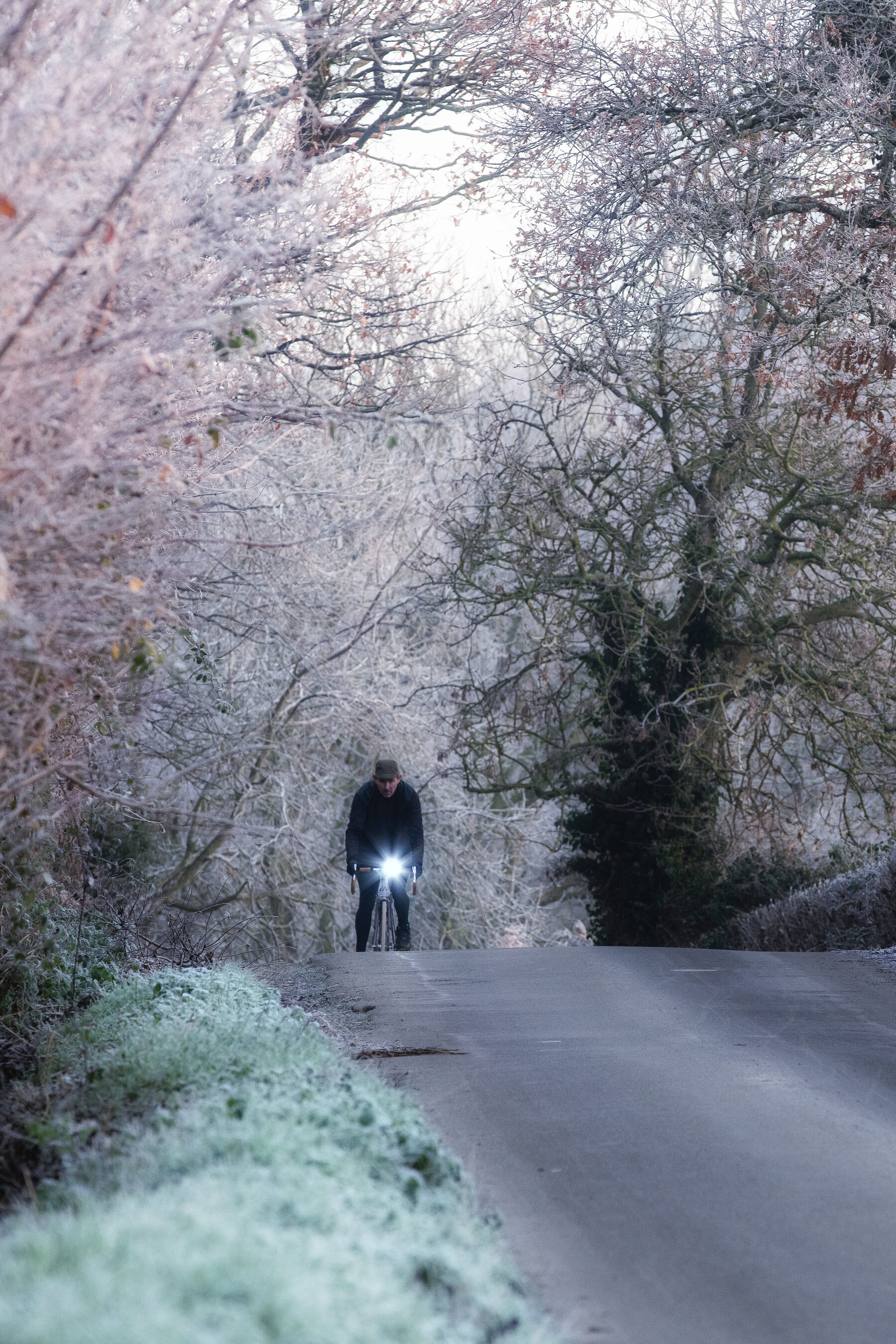 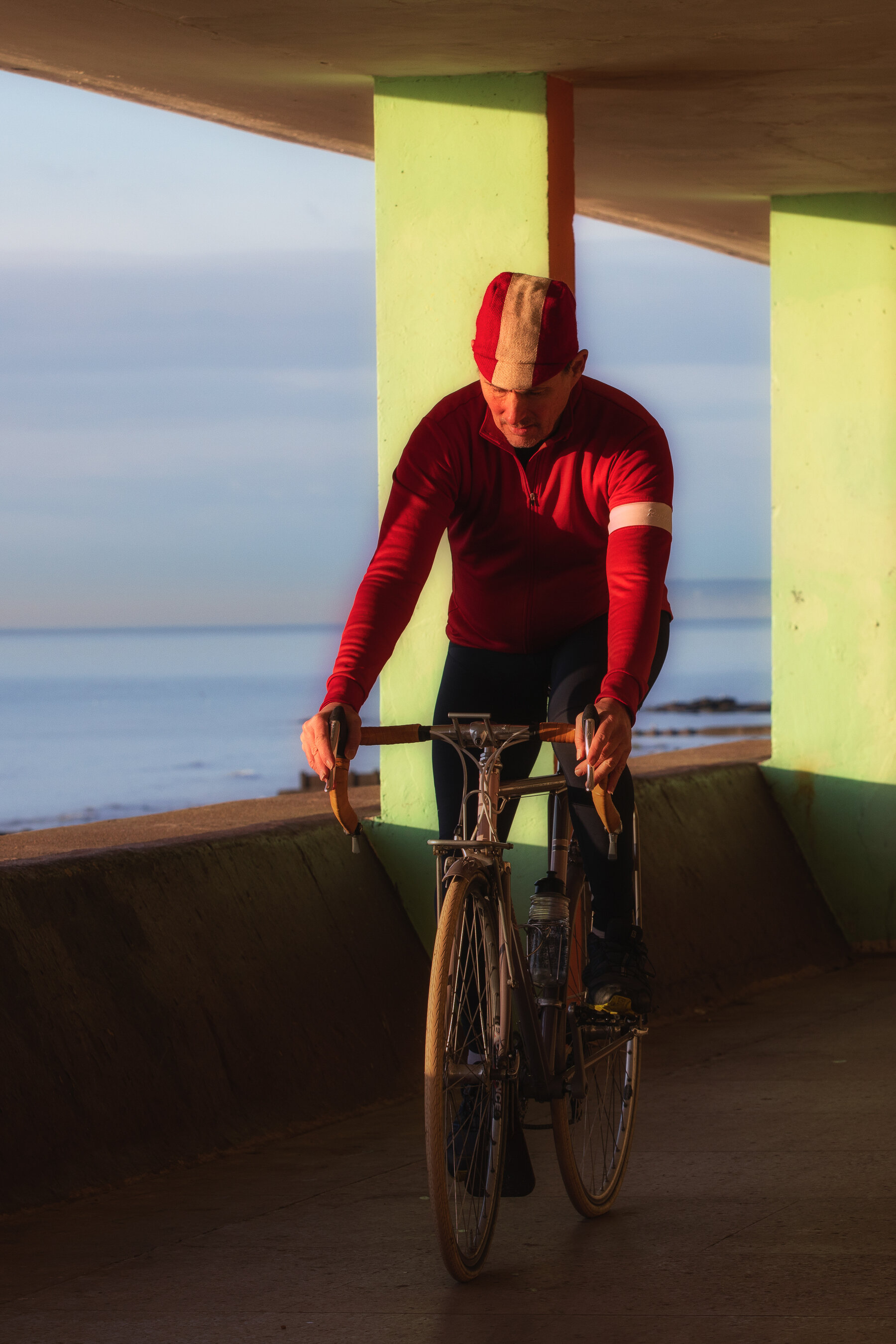 The seafront at St. Leonards-on-Sea an hour before dawn.

Old oaks near Wartling, in frost.

A spin along Bottle Alley, a 1930s colonnaded promenade along the seafront in Hastings.

Placing yourself artistically in the scene is a far trickier proposition. It requires juggling a maddening number of details, most of which you never think of until you start doing it and look critically at the results. Everything matters, from the drape of light and shadow, to the set of your headlamps, to your body language on the bicycle. You have to be actor, director, location scout, gaffer, key grip, even wardrobe assistant: I always carry a spare jersey or two in different colors to make sure I can work with any backdrop.

What’s more, you have to play all these roles in real time, in rapidly shifting light, in an uncontrolled environment where cars, pedestrians, dog-walkers, horses, cyclists and joggers can — and do! — pop up out of nowhere. It can be hugely frustrating, and yet at the same time intensely satisfying when it all comes together. 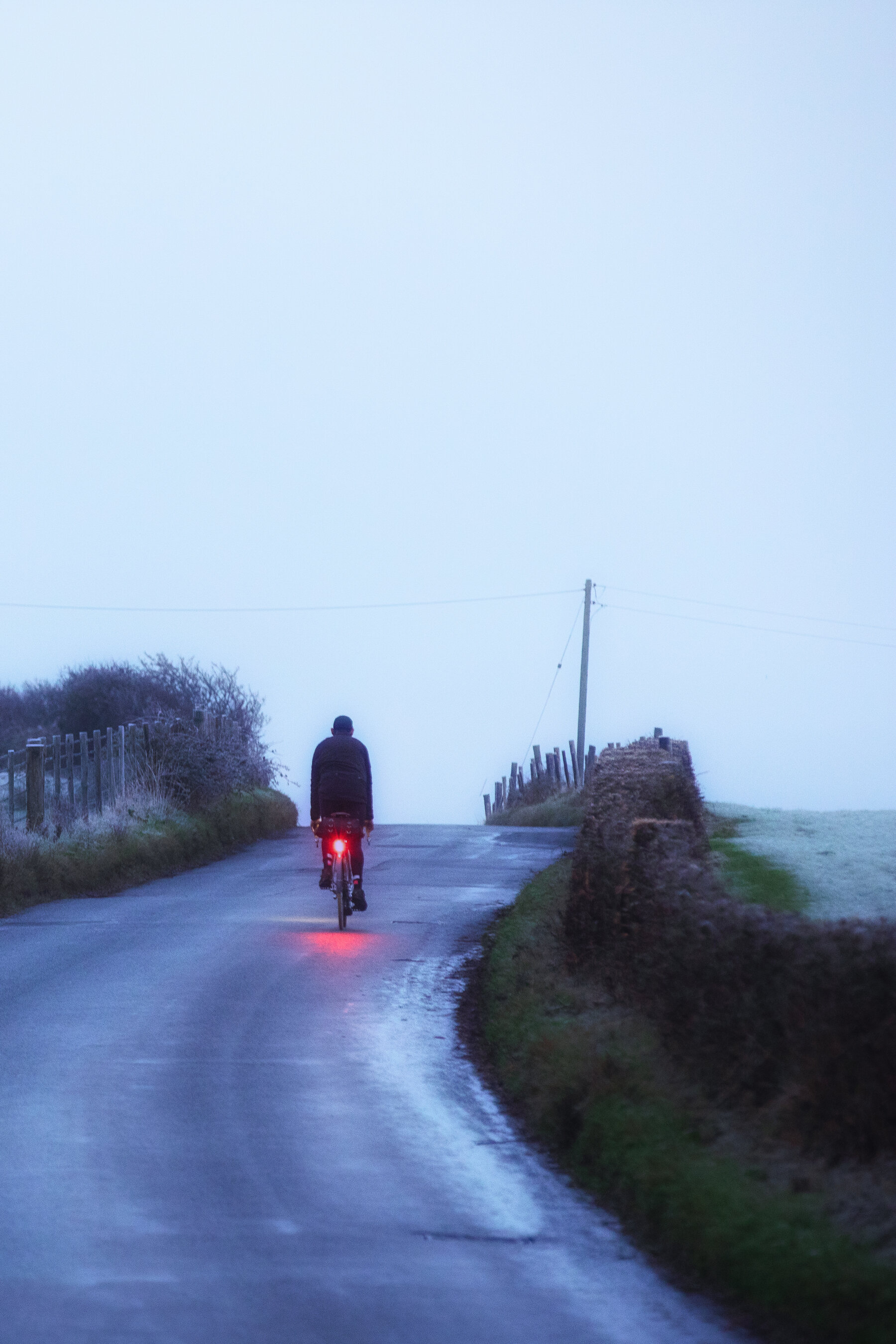 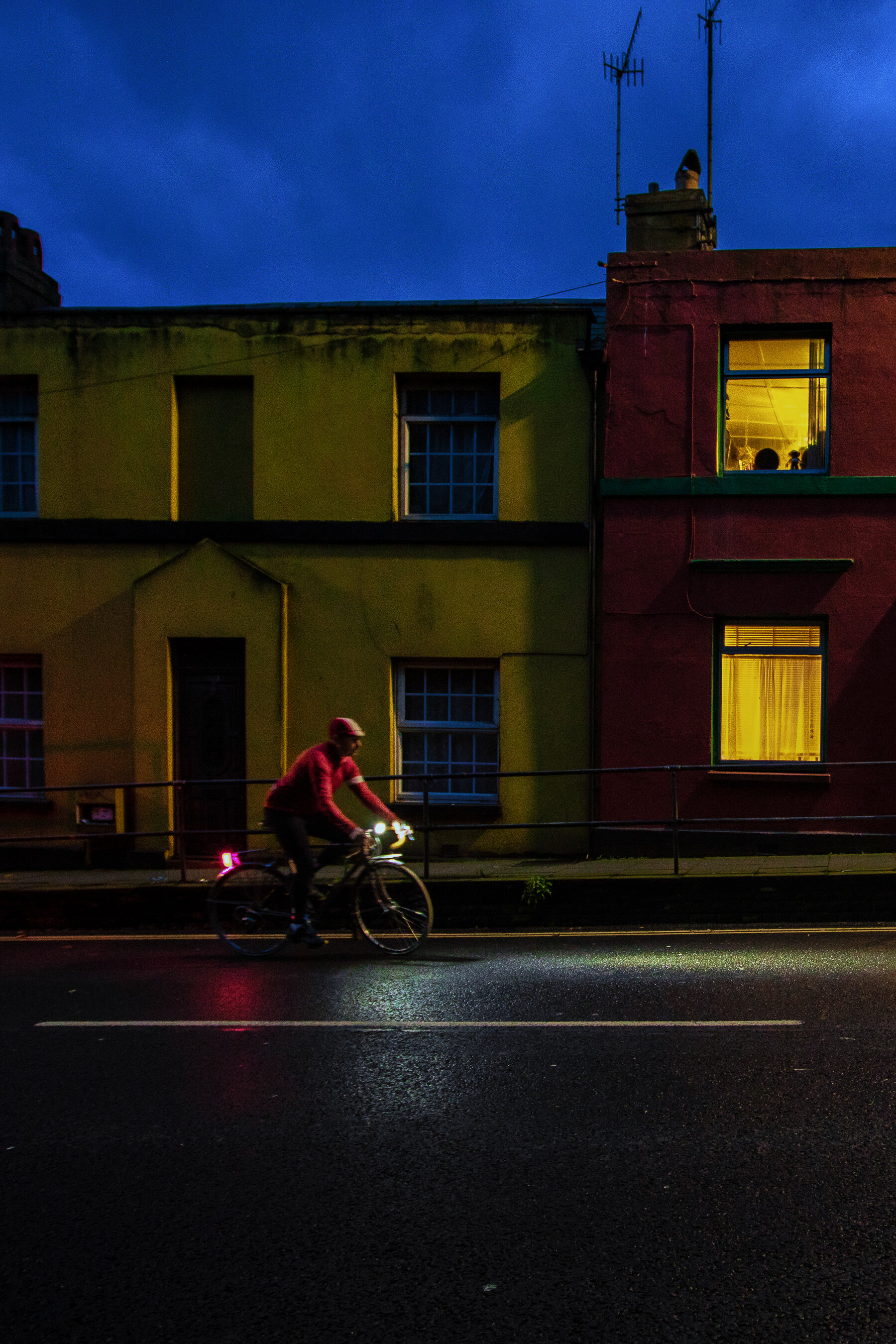 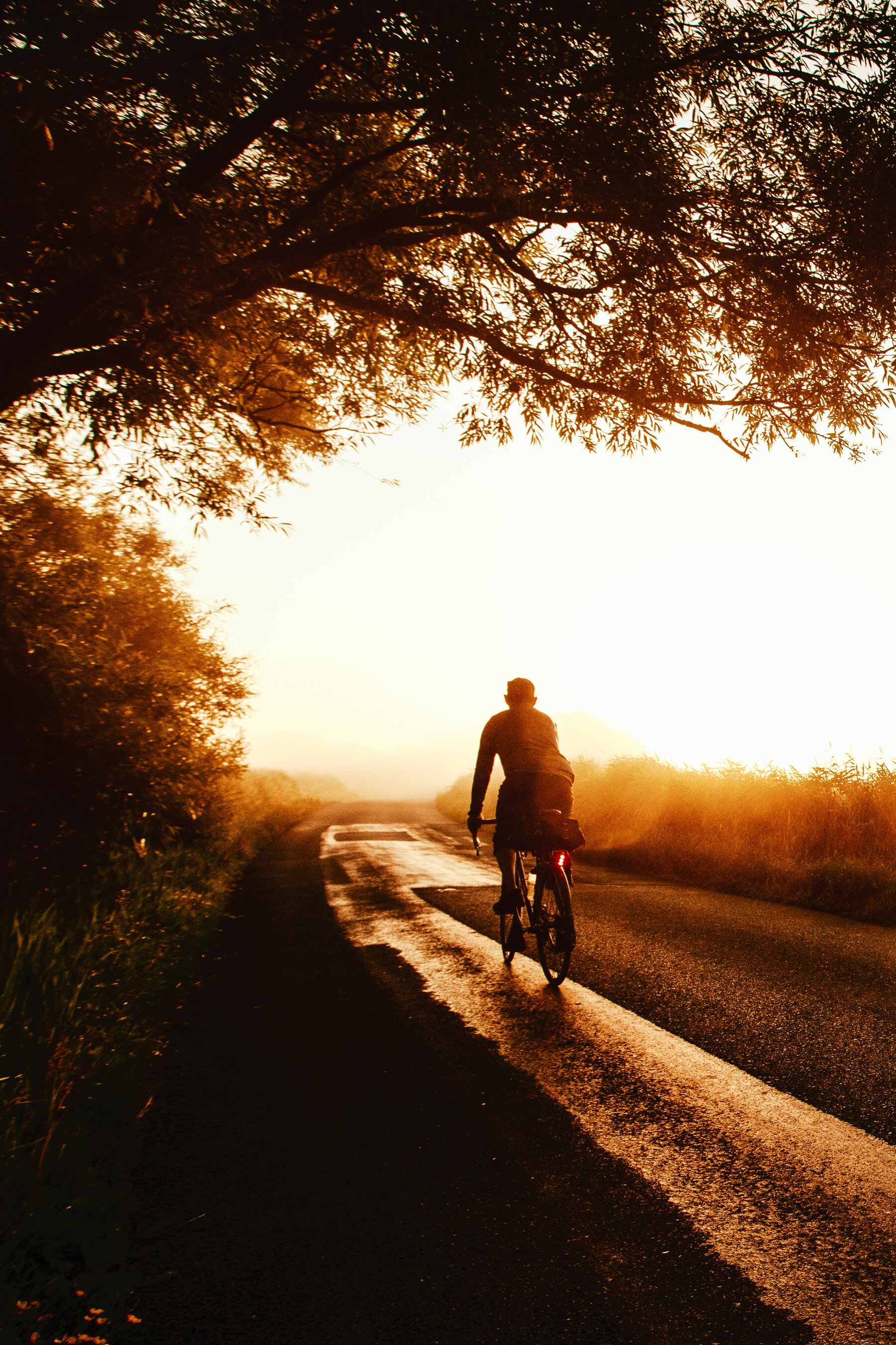 Sunburst over a Sussex country lane.

It’s addictive, too. Over the past year I’ve become a keen student of local geography — not just the layout of the towns and the architecture and the contours of the landscape, but when and where the light falls as the seasons progress. I know the tide tables like an old salt and follow the phases of the moon. I’ve developed a peasant’s eye for weather. I can tell at a glance, when I step outside my door, those mornings when an evocative mist will be rising miles away on the marsh. I plan my outings with the same jaunty expectancy I used to feel on my way to the airport. And when I push off down the street, the world becomes big again, the way it used to be when I was a child: rich in detail, ripe for discovery.

By the time I return to the house, several hours later, having witnessed the sunrise and put however many miles of Sussex countryside beneath my wheels, I feel as though I’ve been places, seen things, traveled in the grand old sense of the word.

And, ever the travel photographer, I bring back pictures of where I’ve been. 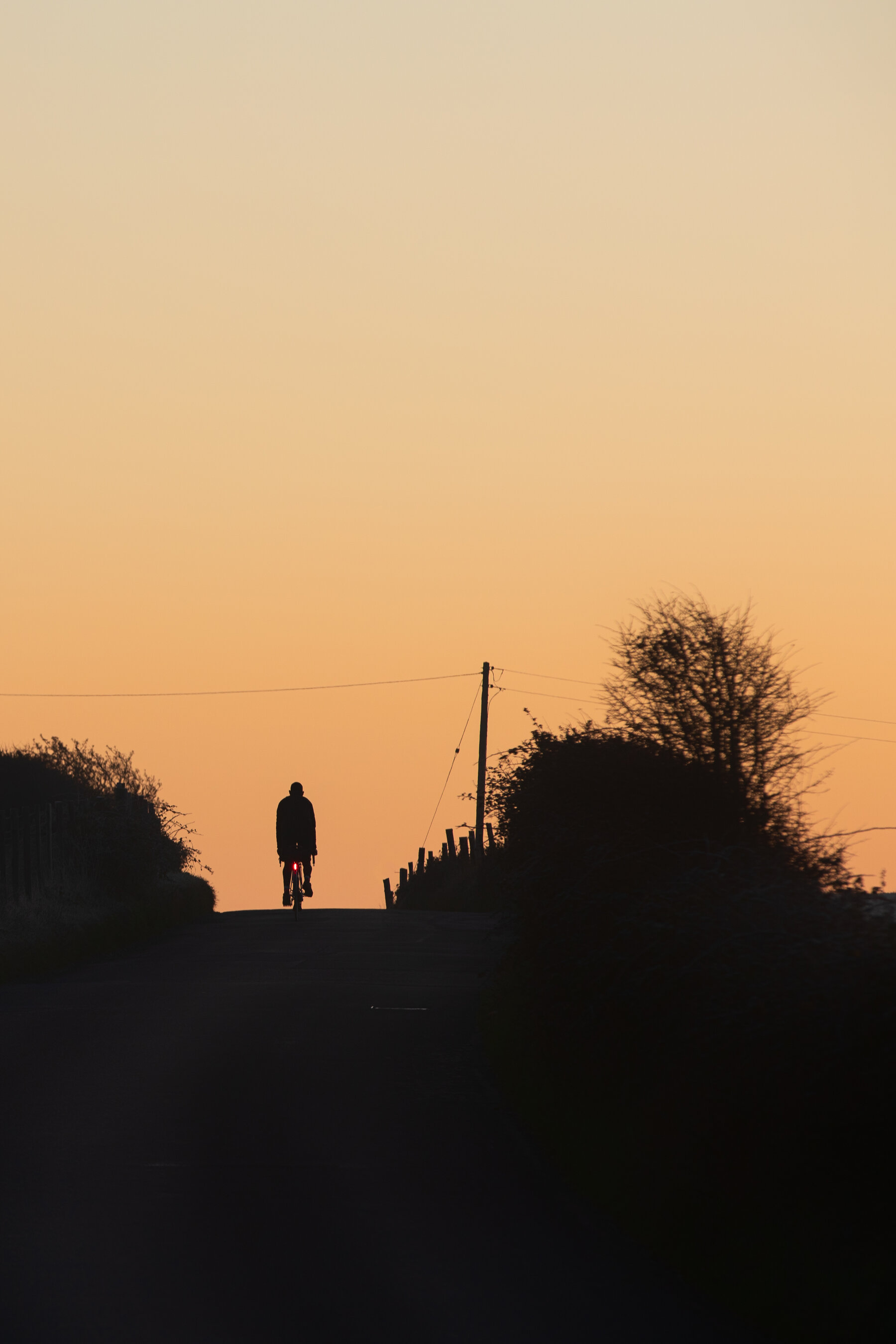 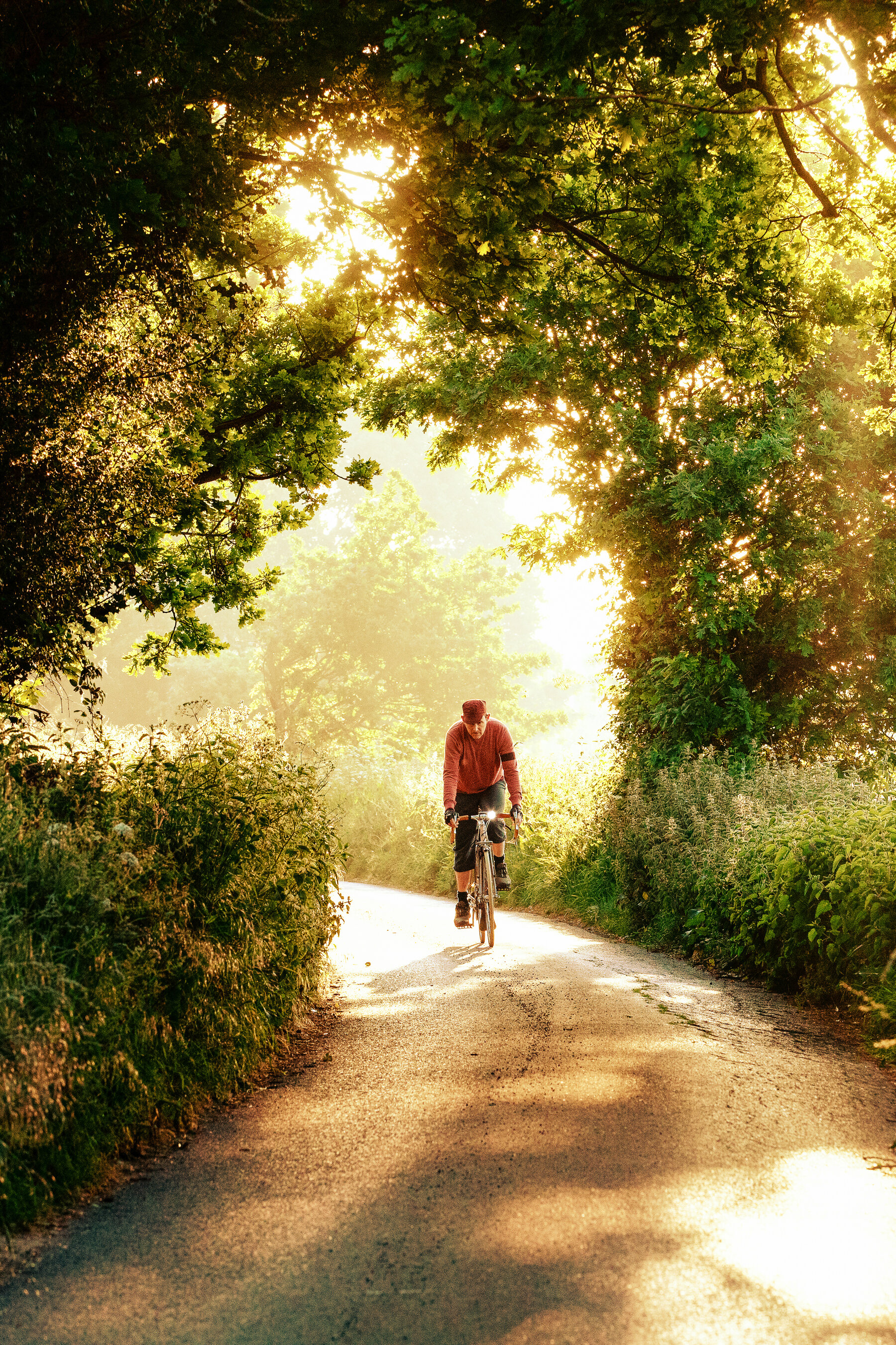 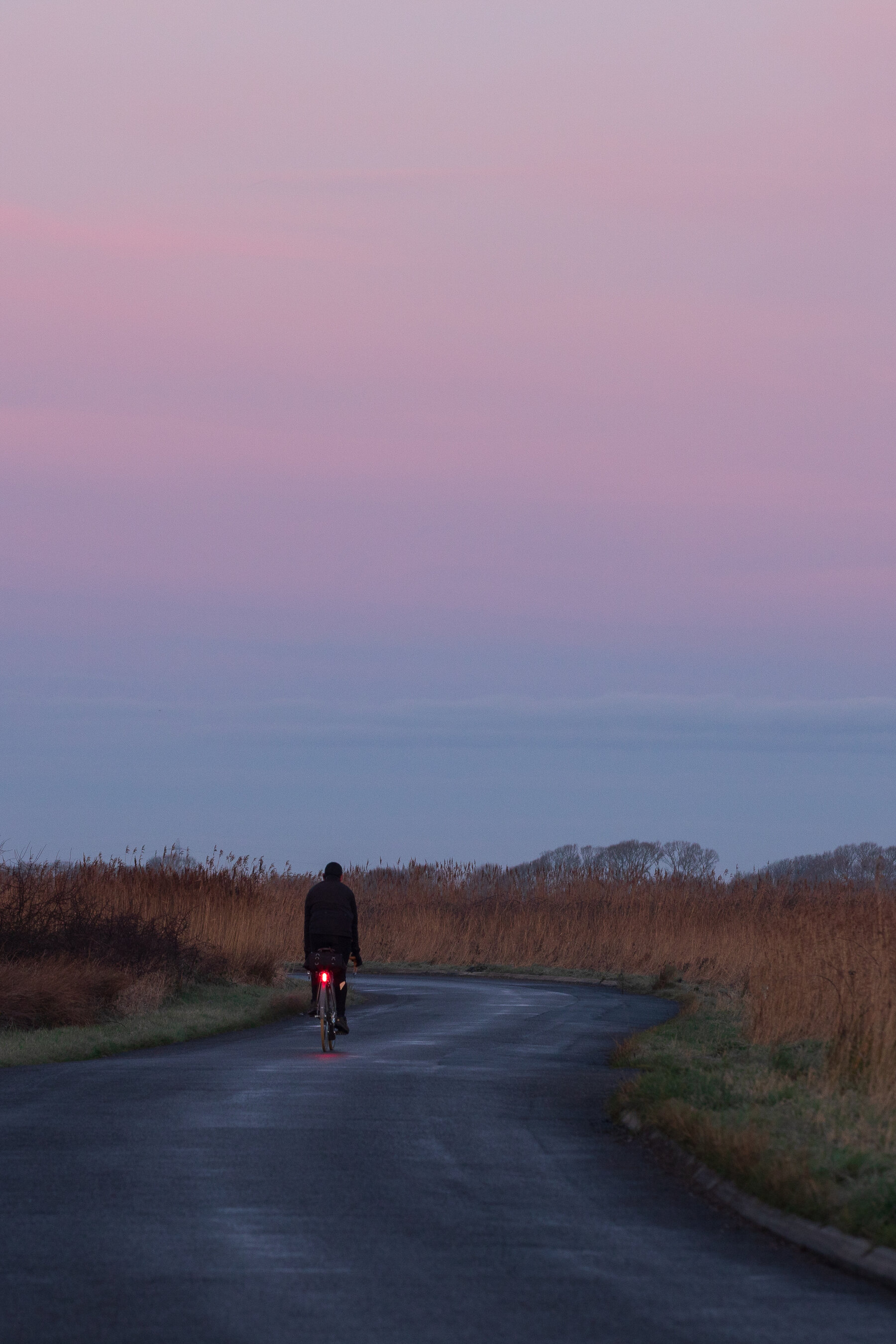 A hill before sunrise, homeward bound on the Pevensey Marshes.

To reach this little lane by Rye and catch this light, I had to leave home at 3 a.m.

Moonset over the marsh, on a quiet lane near Normans Bay.

Roff Smith is a writer and photographer based in England. You can follow his daily rides on Instagram: @roffsmith.